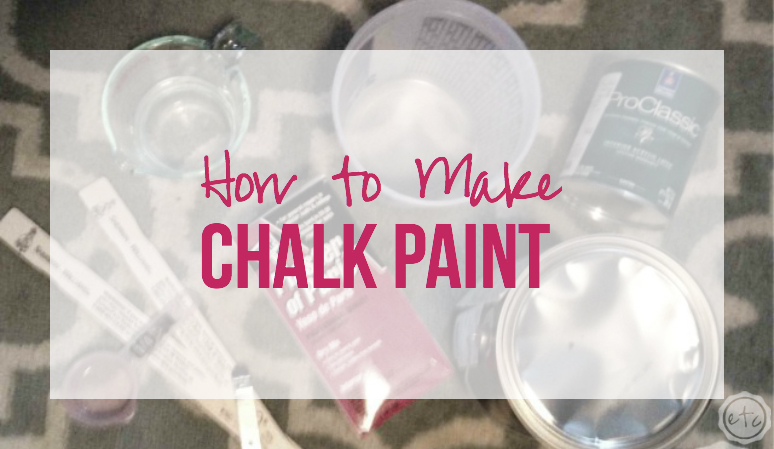 Guess what I did this weekend? Can you guess? I decided to MAKE chalk paint!!!! I am so proud of myself! Haha… I’m humble too! I have wanted to paint my (last unpainted) dresser for so long but couldn’t quite decide what to do with it! First I had to decide on color, then I had to decide on paint (I don’t love latex for furniture but I didn’t want to make the 45 minute drive to buy chalk paint…) but I’ve seen the hype about making your own chalk paint and I decided I was going to give it a try!

I made two batches: one grey and one sea-foam! Since I needed two different colors and there are sooooo many different chalk paint formulas out there I decided to switch thing sup a little and try different formulas for each.

It was awesome! It worked like a charm and I still have buckets and buckets of paint left over… seriously I could paint so many more things!

Looking for a bunch of posts on painting? I’ve got you covered!
Click here to see all of my helpful paint posts in one place! 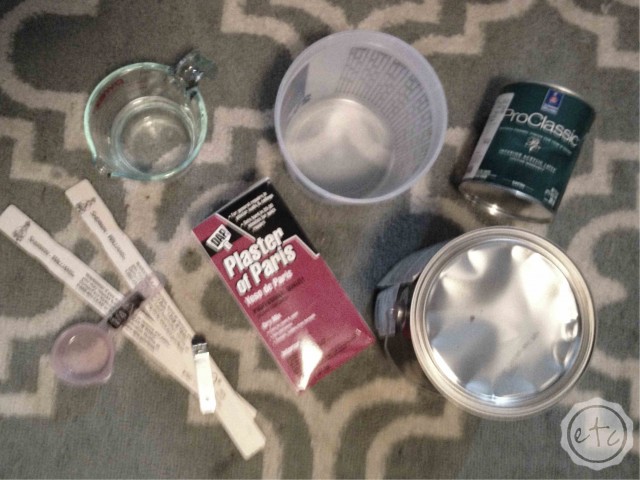 Latex or waterborne paint! I tried Cashmere for the grey paint and ProClassic for the seafoam.

Plaster of Paris… did you know this stuff was so cheap? 3.49 for a large box! I have leftovers!

A container for stirring your chalk paint… preferably one with measuring increments on the side.

Something to stir with! I used a small paint stick however I have heard that spoons work great for getting the clumps out! 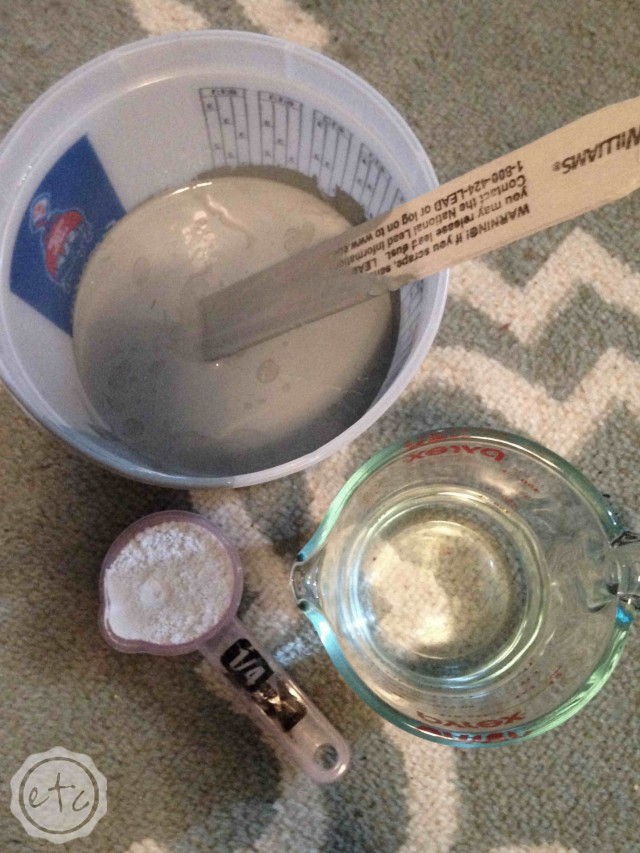 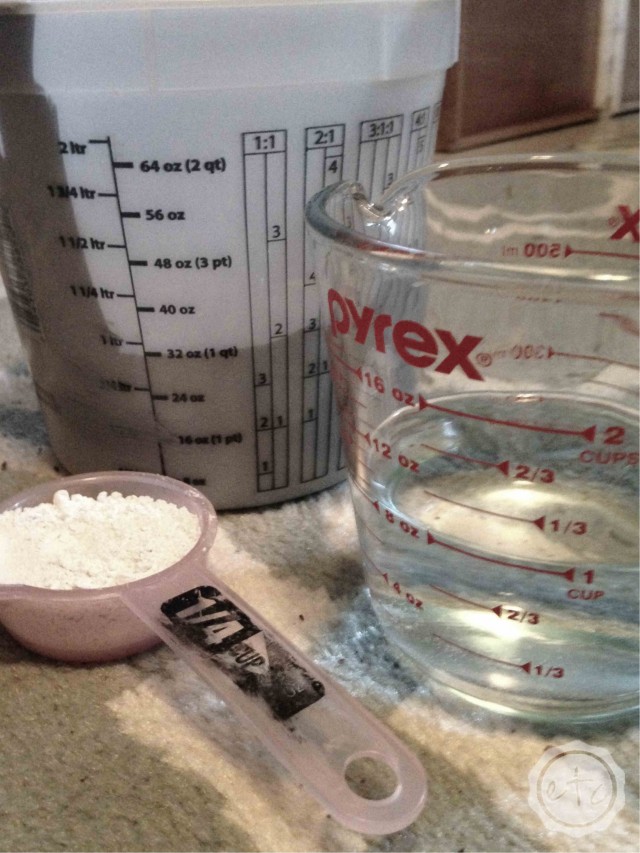 The body of my dresser is going to be grey… plus the shelves my hubby is currently building me! So I wanted to have enough grey chalk paint to paint EVERYTHING with the same batch. That way I know the colors match! So for the grey paint I mixed quite a bit of chalk paint! 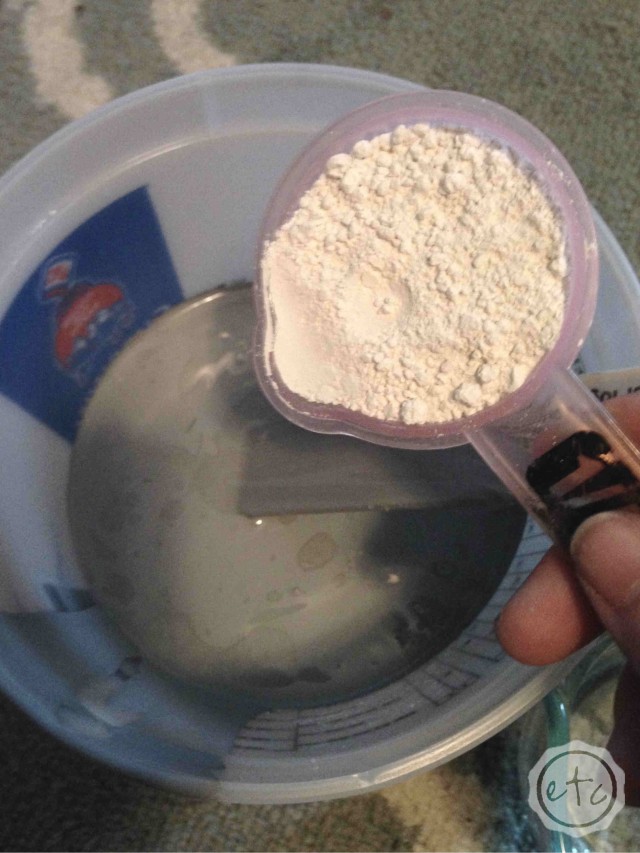 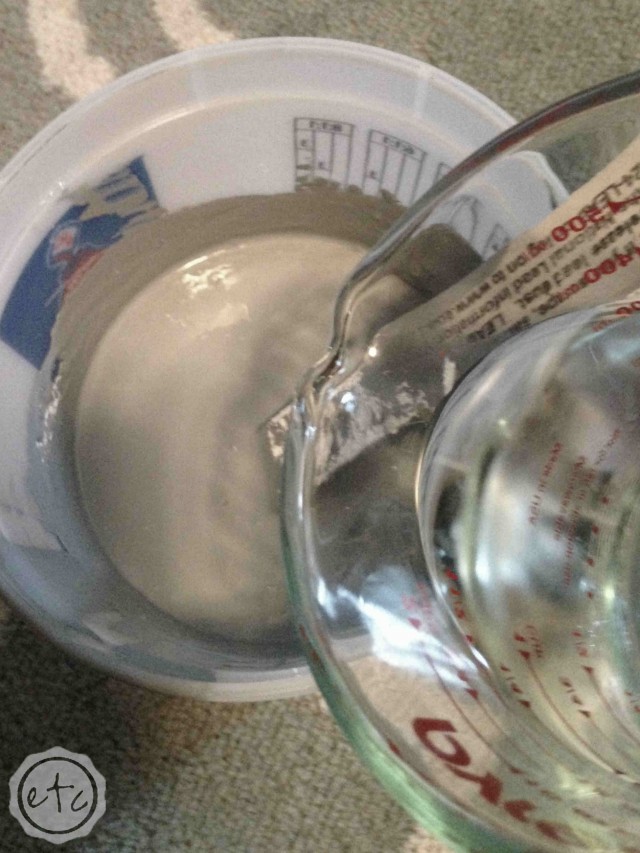 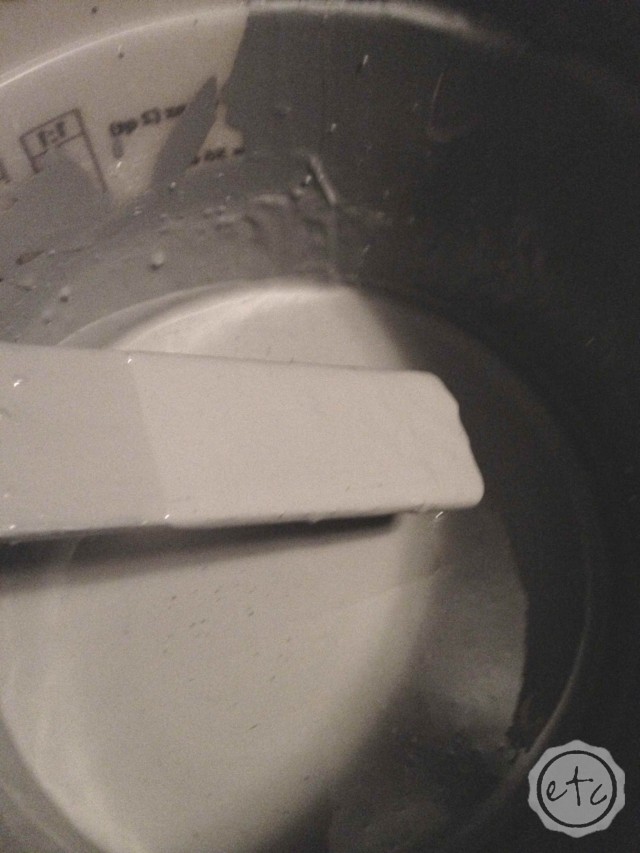 I was worried at first but after putting two coats on my dresser I’m amazed at the finish! It looks so smooth and it covers so well! The only downside is that you have to be extra vigilant at catching drips! The watery formula is prone to running on the vertical sides… but a quick brush stroke levels the whole piece out! 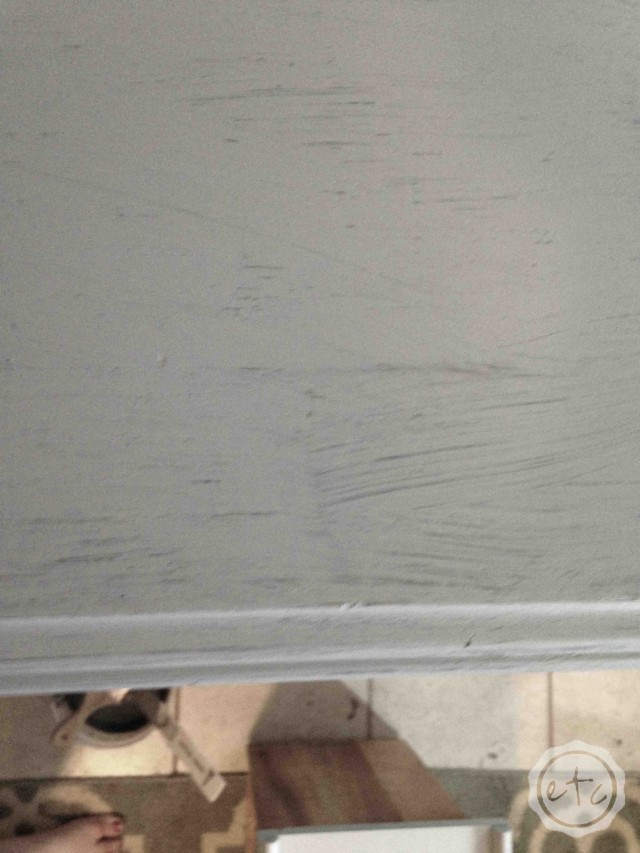 Above is an example of the dresser top after one coat: you can definitely see the brush strokes and the paint is not quite covering. That is alright… DON’T PANIC! As with most chalk paints a second coat will take care of both problems! As you can see in the picture below a second coat levels out the brush strokes and leaves the paint silky smooth! I did add a third coat to the top… but that’s a habit of mine. I always do an extra coat on the top surface where the most wear and tear occurs… the sides look just fine with two coats! 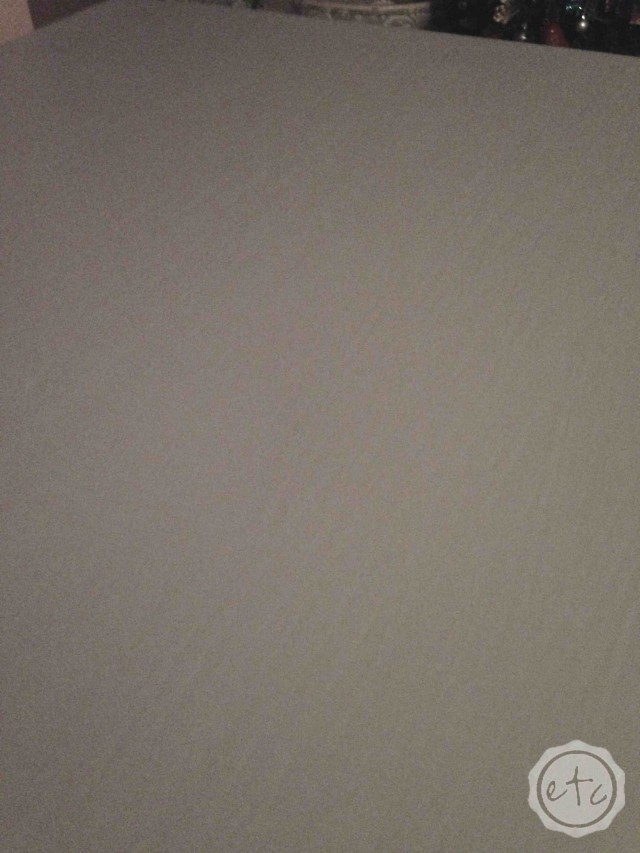 Now I know what you’re wondering… didn’t she say she made two batches of paint? What about the second batch? Don’t worry… I didn’t forget to share my second experiment with you! For my second batch of sea-foam paint I mixed up the ingredients even more… adding even more plaster of paris to try and alleviate the watery-ness of the first batch. Yes watery-ness is the correct spelling… just go with it! 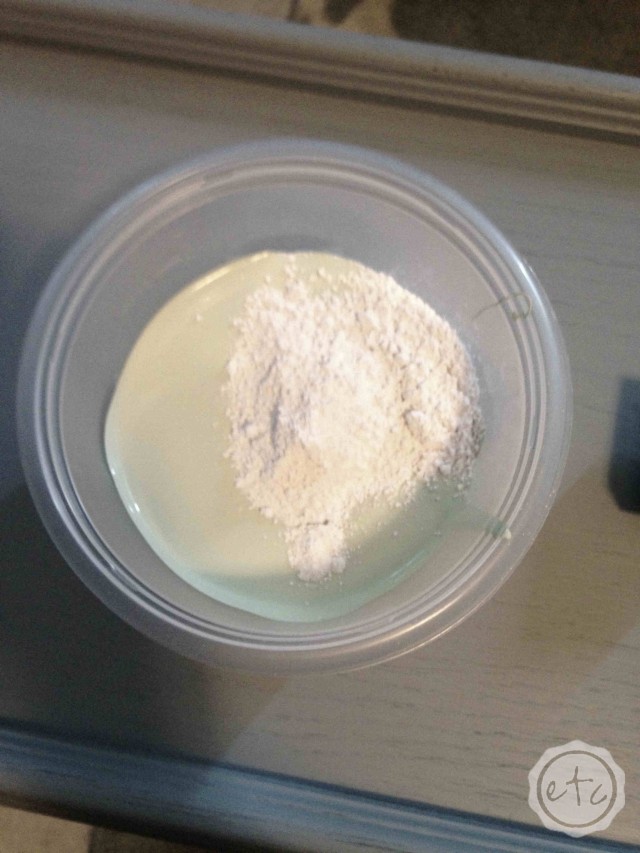 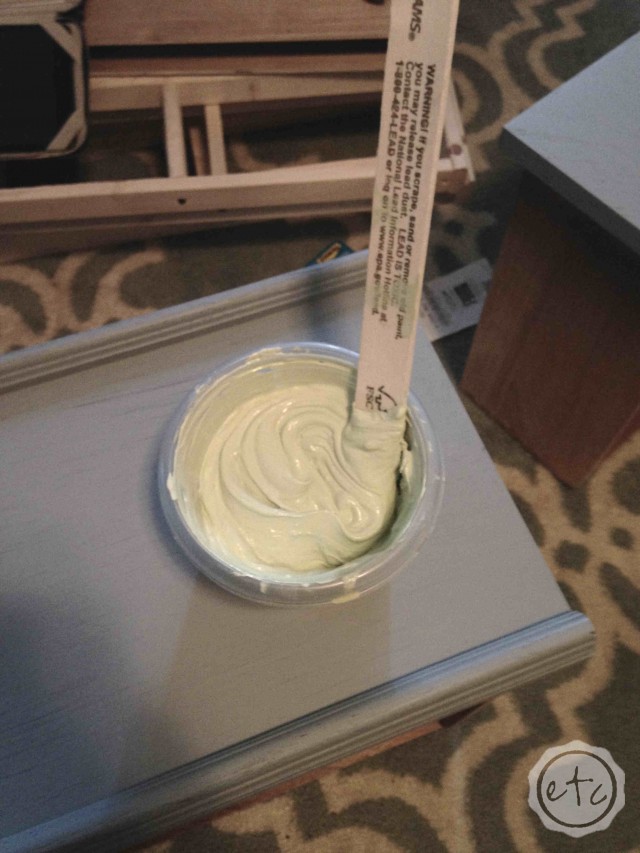 With this batch I had the opposite problem… not watery enough! I had to add a second 1/4 cup of hot water to have any leveling… it seemed more like a paste than a paint! Look at this second picture… the paint can be scooped up! No liquid properties at all! 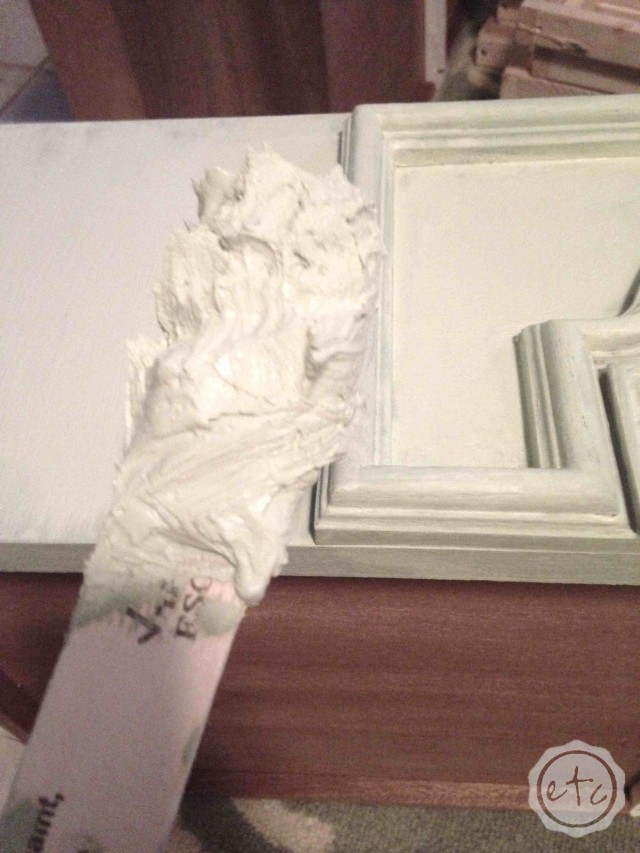 The sea-foam paint covered in one coat since it was so thick however it left more brush strokes than the watery grey paint. The grey paint was also easier to use. So although I was worried about the chalk paint being too watery… it looks amazing and was went on SOOOO easily. While either formula would work I would recommend formula number one! If you’d like to see the dresser as a finished product… check back next week! I’m so excited to show it to you!

All in all the whole process was a success… I’m so glad I decided to make my own chalk paint!

P.S. If you’re struggling to find the plaster of paris (like I was) and not a single wal-mart employee stops to help you (like they did for me) PLUS you’re too darn shy to ask… I’m here to help. It’s in the hardware section.. by the wall Spackle. Not in craft section like I first thought. 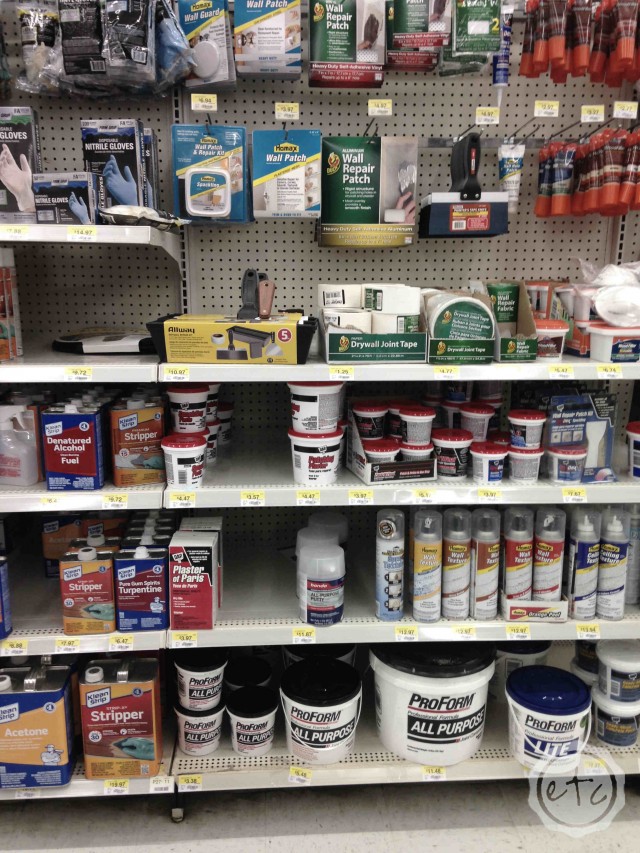 P.P.S. Here’s a helpful graphic with all the steps!

Linking up with: Lou Lou Girls

Looking for the perfect paint color? In several minutes a day I'll guide you from swatches to done in 6 days.

The number one question people ask when they watch

Well y’all Christmas is coming up quick... which

Ready for another fun and easy resin project? Thes

If you haven’t joined Michelle at @weekendcraft

Well y’all I’m getting this close to unpacked

Well it’s still a work in progress but I finally

#ad how amazing did these little fall coasters tur

Okay... is it bad if you just want to make coaster

Happy #nationaldogday to the fur babies that are (

GIVEAWAY CLOSED Our winner is @kamikvega Check you

A little peek into the fun summery Tablescape I pu

#ad Did you know you can put infusible ink onto al

Okay so It’s no secret that I’ve been obsessed

After a lot of struggle, loss and frustration I am