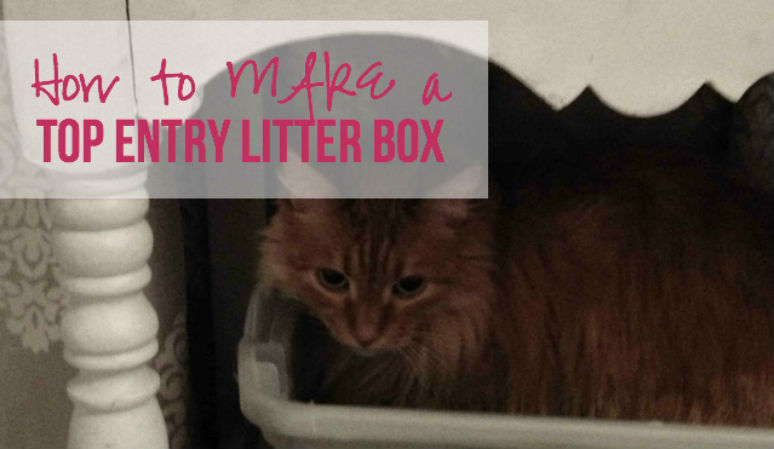 When we moved into our new home we quickly realized the typical front loading litter boxes we had been using were no longer fitting the ticket. In our apartment we had a nifty little cutout in each bathroom. It was meant for a little stool, so that the counter space would function as a vanity. We quickly learned that by stuffing the cutout with our dirty clothes hamper and the litter box (with the litter box facing the back wall) our little puppy would have no access to the opening. The cats of course would simply hop over the litter box and access the opening from the back. You see our sweet Yorkie Little Bitt likes to make trips to the cat box buffet… gross! Since our new home doesn’t even have room in the bathroom for the litter box… and a front loading litter box out in the open wasn’t going to work, we had to think on our feet.

We thought about buying an igloo styled cat box, that way the kitties could fit inside but our little Yorkie couldn’t. Unfortunately after taking a look at one we realized they were GIGANTIC. We simply didn’t have the room! From there we started looking for a litter box that had an opening at the top… but they were entirely too expensive.

So what do we do when the only option is too expensive? We find a way to make a cheaper version of course! I started to think about it… what is a litter box except for a box to hold litter? Pet companies make money by adding bells and whistles but at the end of the day any box would do! In fact y’all have seen pictures of our fabulous kitty litter boxes… although you may not have known what they were! 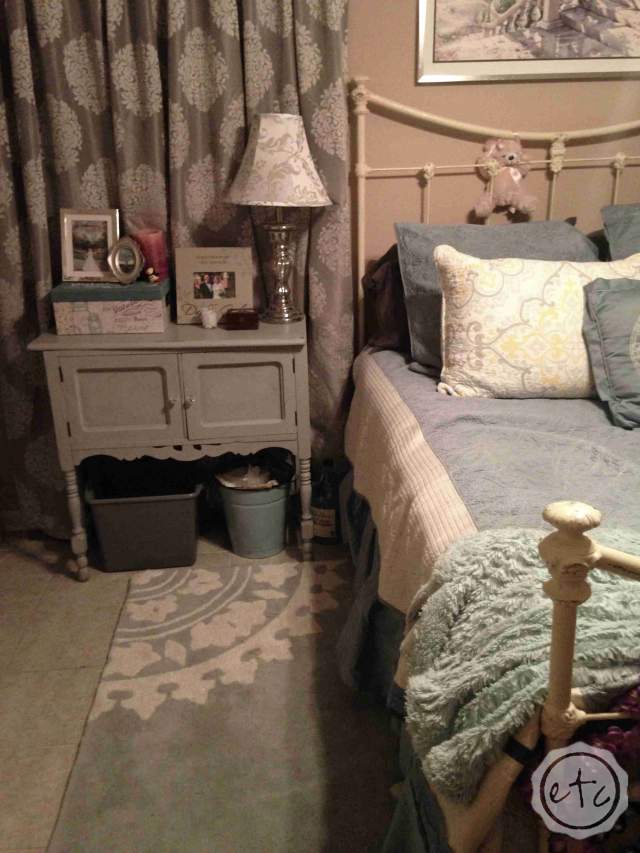 Remember this picture from our rug reveal? I will give you a hint… the litter box is the grey box under my bedside table. Sneaky, huh? We started with a plain clear storage box from Wal-Mart… we chose a medium sized box. The goal is to balance the need for a small indiscreet litter box (for the humans) with the need for a box big enough for kitty to fit into! If your box is too small and confining kitty will not want to… visit the facilities (wink wink) so make sure your box fits your kitty. 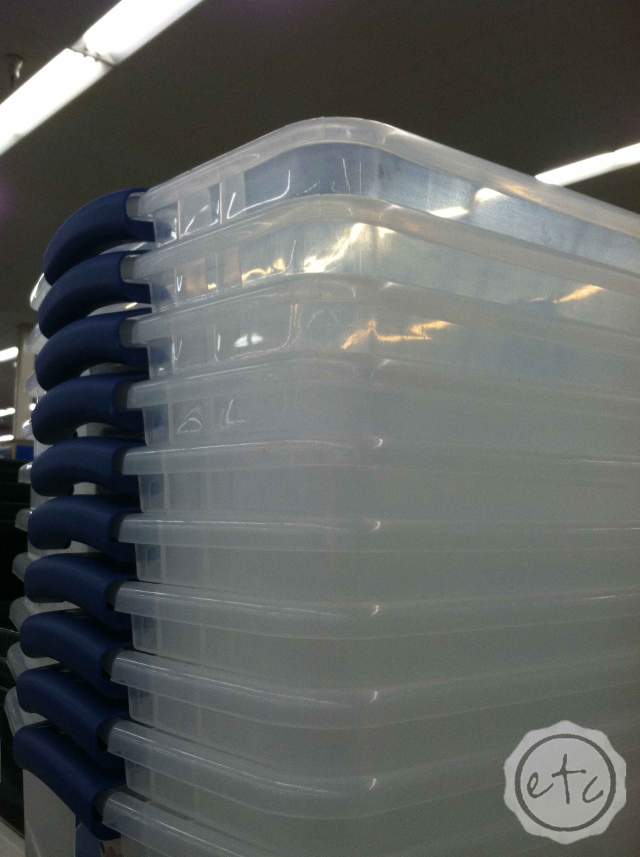 Once you have your box picked out the rest is super easy! I chose spray paint in coordinating colors: grey for our bedroom and purple for the bathroom. I took my boxes outside and spray painted the OUTSIDE of each box.

I made sure to spray the outside just on the off chance that the spray paint might be harmful that close to kitty’s skin. Plus I wasn’t sure if the *ahem* contents of said litter box would mix well with spray paint. Has anyone ever tested spray paint for it’s reaction with kitty byproducts? I don’t know and I don’t want to know! To be safe, I simply left the inside alone and sprayed the outside. 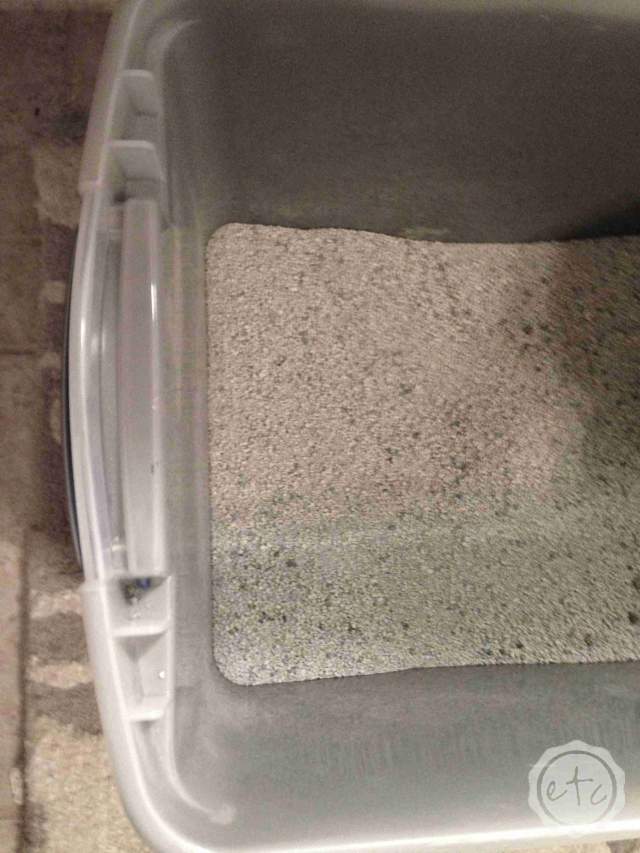 Now at this point you have two options… you can fill your box with litter and be done! Or you can add a lid with an opening. We started with the lid and quickly found that our kitty’s were too big to fit properly through the opening.

So we decided to forgo the lid and go completely commando… if you choose a bigger box the lid might be an added benefit! In order to cut the opening we used a highly advanced method of a box cutter and a bit of elbow grease! My honey cut the openings and they look great… just not quite big enough for our kitty’s! Luckily the boxes work just fine without the top! 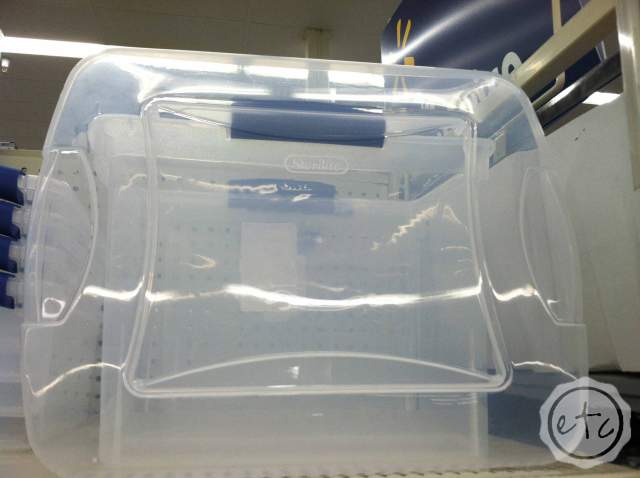 This homemade top entry litter box work great for my two kitties… I was worried at first that they would shun them. For the first couple days we left out a combination of the new boxes and the old. However they haven’t had a problem since the first day they were introduced! They smelled the fresh litter and hopped right in! 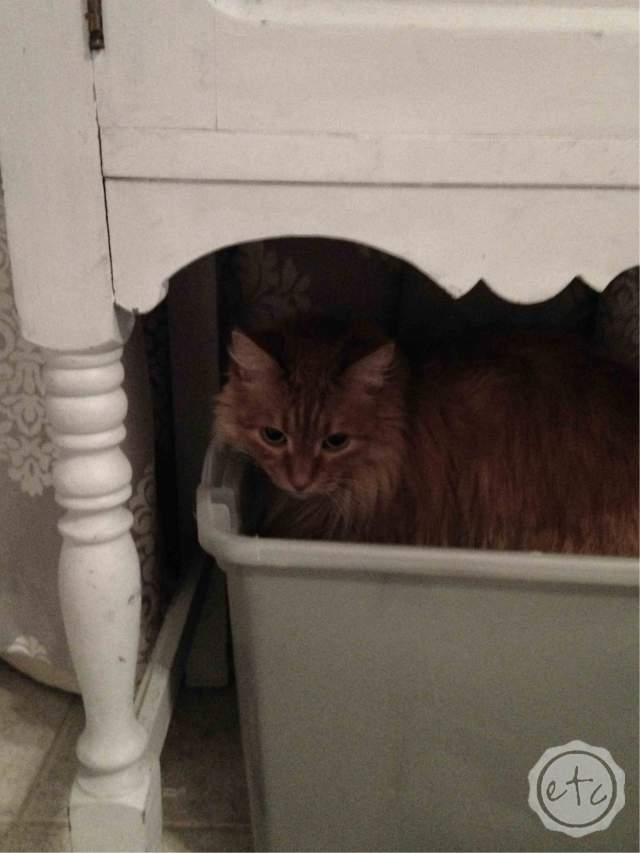 An added bonus of a top-load litter box is that kitty’s have to jump out… as opposed to step. This means that most litter falls off of their little feet back into the box… which helps with the litter that tends to settle on the floor in front of the box. 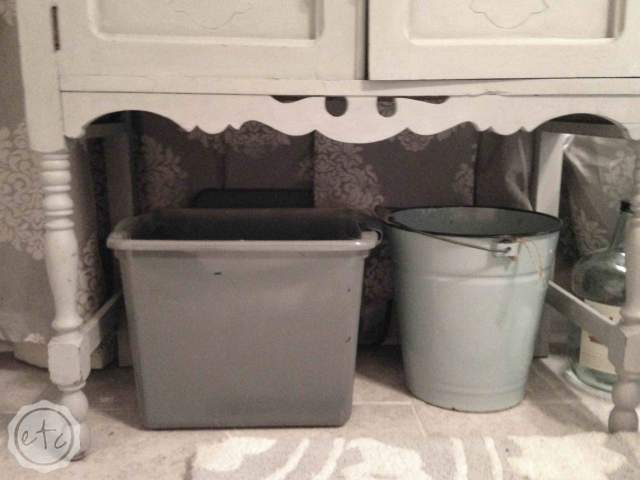 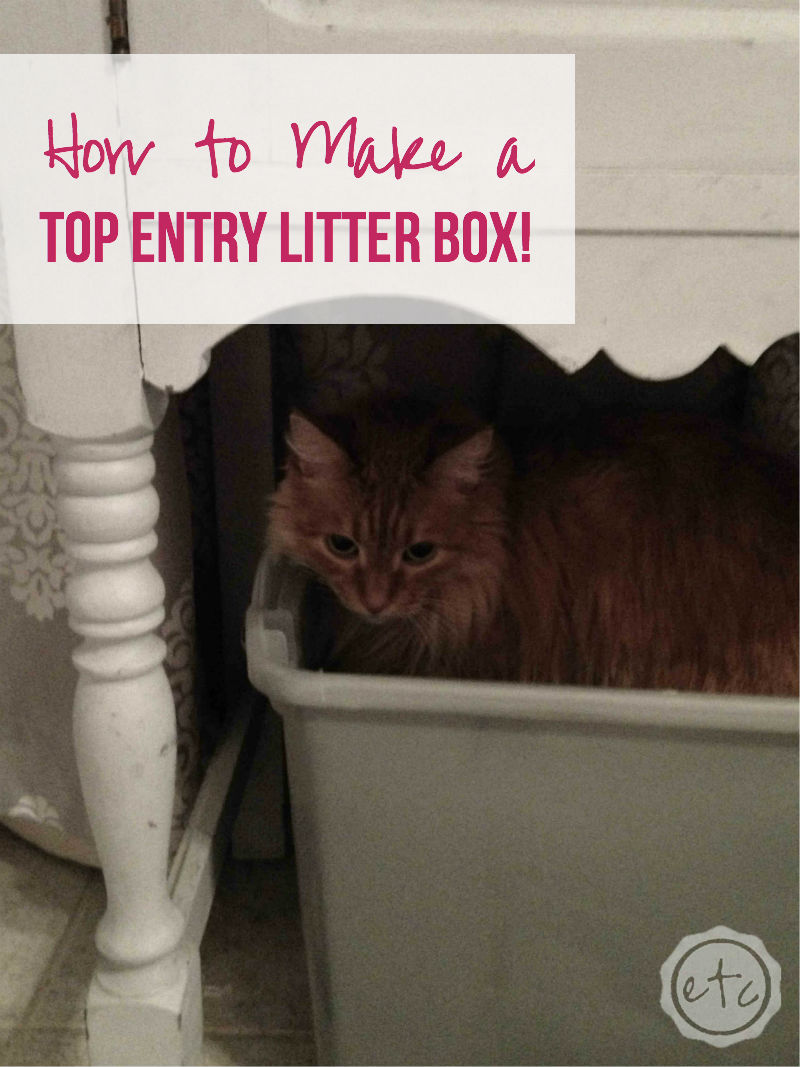 My favorite part is that these little boxes don’t LOOK like litter boxes, which is a complete bonus when you live in a little house like ours. If the boxes have to be in plain sight… at least they look cute! Plus they cost about $5 each… way cheaper than your traditional litter box!