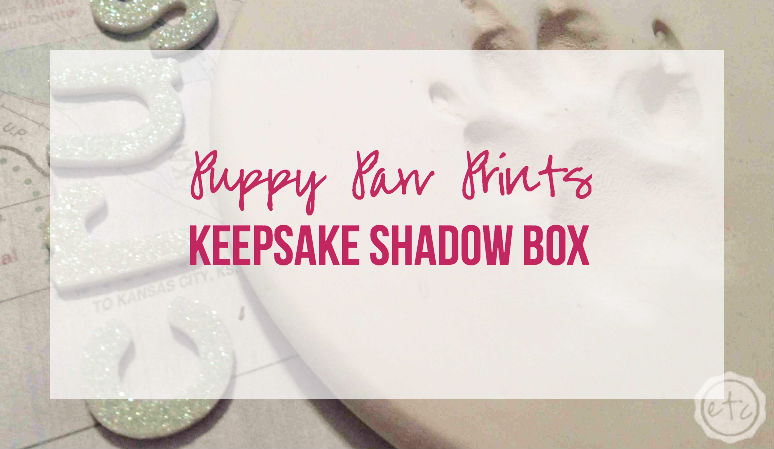 My husband (unlike me) does not have hoards of things that are HIS: furniture, clothes, knickknacks, keepsakes etc. (I on the other hand have kept every single thing I’ve ever touched that wasn’t wrestled away from me… I may be a pack-rat. The jury’s still out on that one). Either way since he has so little from his past the things he does have are important to him. Figurines from his great-grandma, his desk from his Dapaw, a dresser from his mom and two paw prints from his beloved childhood golden retrievers. Buddy and Hanna.

When I first met him they were in a drawer under his bed, he’s not the crafty type and he didn’t want to risk breaking them so they stayed tucked away.  When I first saw them I asked if he would like me to make a shadowbox to put both little paw prints in. So that he could see them every day but they would still be protected. He LOVED the idea.

Looking for a bunch of posts on DIY & Crafts? I’ve got you covered!
Click here to see all of my how to DIY & Craft posts in one place! 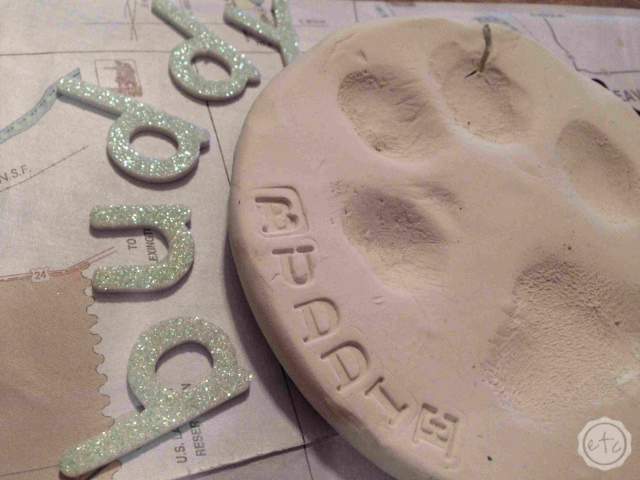 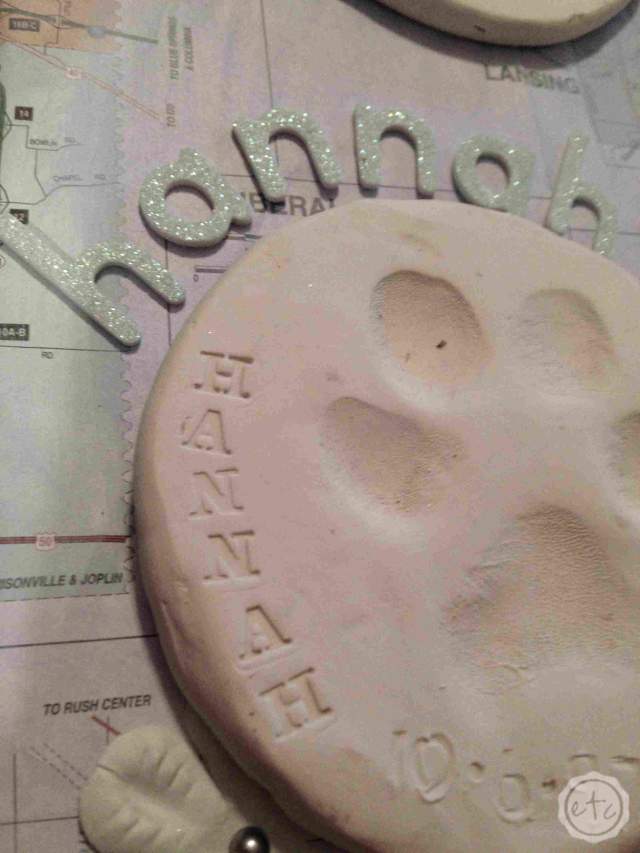 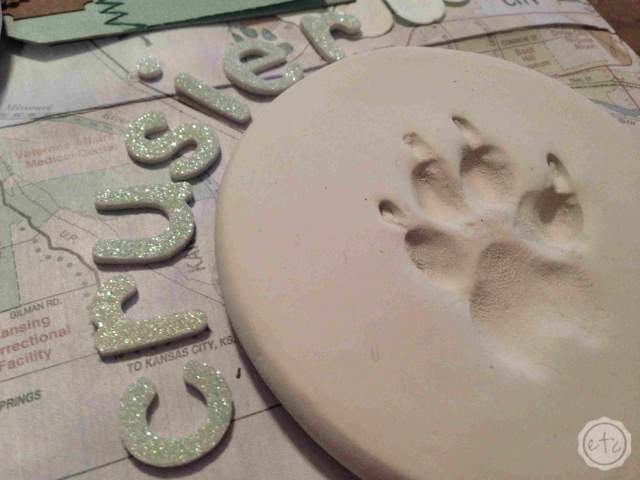 Unfortunately, since I found those first two paw prints we’ve gained a third to go in our little box. Crusier was a 14 year old Silkie Terrier we found abandoned to the rescue group outside of Petsmart. His owner (a 80+ year old man) could no longer take care of him, the shelter was overran as it was and didn’t have the shelter space to take Crusier in. We found him shivering and confused… the only Daddy he had ever known had just dropped him off and walked away. We took him home that day and for 6 months he was the perfect addition to our little family. He loved to play fetch and cuddle up with Bitty, our three year old Yorkie. My husbands lap was his favorite place to be… for such a short time he completely stole our hearts. However, he was 14 years old and although the vet said he was in great health he slowly deteriorated. We truly believe he had a broken heart. He gave us such joy in the time we had him so I try to remember him every day. His little tongue lolling out as he chased tennis balls with his 3 year old little sister.

While I could never truly do justice to the three souls who touched our hearts, this little shadow box is my way to remember them. To remember the unconditional love they were so kind to give. I started with their little paw prints: two large golden retriever prints and one itty bitty silkie terrier paw. For supplies I used: heavy duty Velcro, a shadow box I had on hand and plenty of scrapbook supplies. Being a pack-rat I have PLENTY of supplies to choose from… I simply walked in the office and made selections from my stash! I chose several large and small flowers in coordinating colors, cute puppy dog rub ons, metal embellishments and several stickers with sentimental sayings. Of course the embellishments are up to you, but I like to use a wide variety. Every project looks better with layers of contrast. 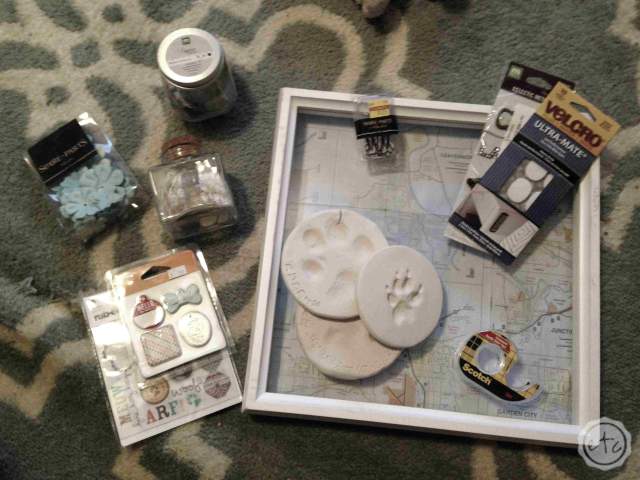 The first step was to determine where I wanted my paw prints to rest on the background. Since I had three I decided to stagger them a bit. This left room for embellishments and gave a bit more interest than a standard triangle. The paw prints are made of heavy clay so to attach them to my background I used ultra strong Velcro. It’s worth mentioning that I didn’t attach the paw prints ONLY to card stock, first the card stock was attached firmly to heavy duty cardboard. I didn’t want those heavy clay pieces to rip a hole straight through my card stock! We needed a sturdy base to build off of. 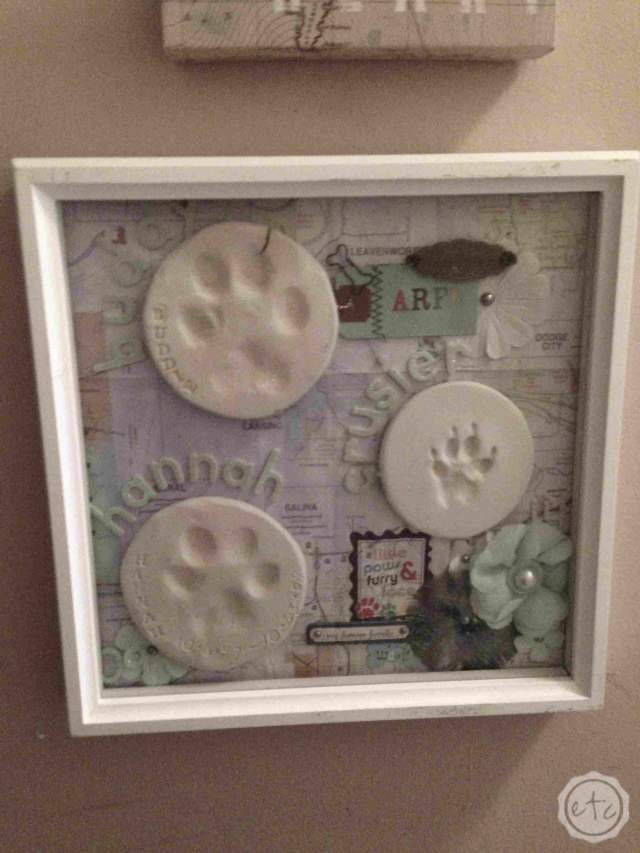 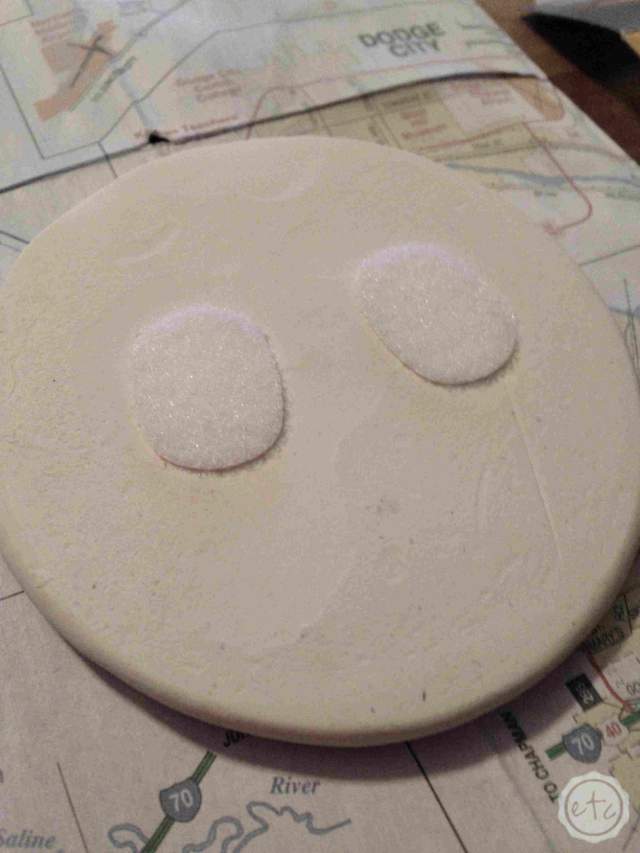 I decided to use two pieces of Velcro instead of one, just in case the adhesive didn’t take to the clay. I shouldn’t have worried though… that Velcro stuck like crazy! Even with excessive tugging those babies aren’t going anywhere! After gluing the first layer of Velcro to the clay disks I attached the second layer to the first (pictured below). Just like a little Velcro sand which with the sticky side facing out. Then I simply placed the disk right on my background! Easy peezy lemon squeezy! This project might work with a different adhesive (like crazy glue, hot glue etc) however I chose Velcro so that in the future if I decide I’d rather put these little paw prints somewhere else I can easily take them off. Just un-velcro and off we go! I know I’m a smart cookie. 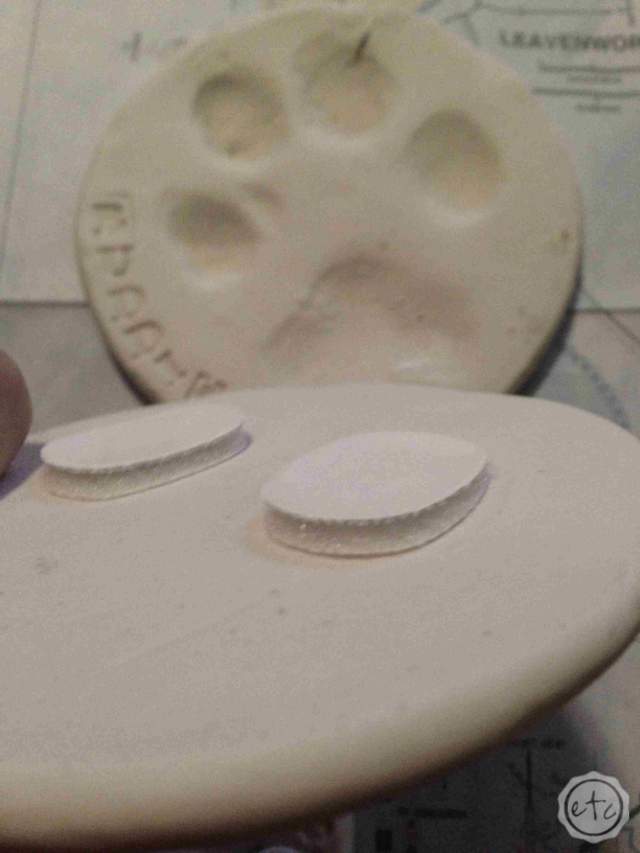 After the paw-prints are down you’re free to add whatever embellishments you like. For me the most important were name tags for all three paw prints. While the embellishments are fun the paws are the real reason we’re all here. Right? Right!

Either way I was lucky to have some great accessories in my stash. My favorite one was this little teal pop-up sticker reading “my forever family”. Followed closely by the rub-on above that says “little paws & furry face”. Those phrases just tugged on my heart strings. Although the best friends plaque was a close second (or maybe third). 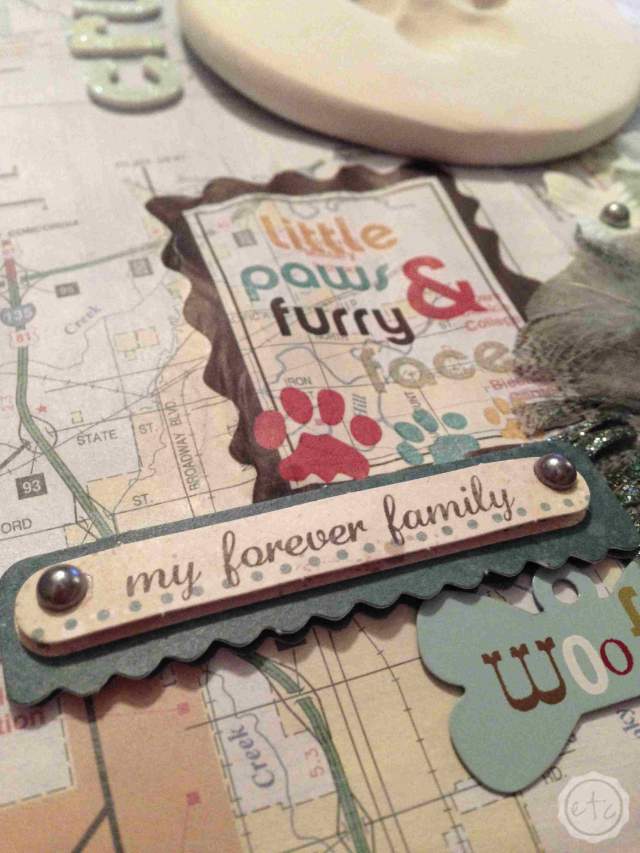 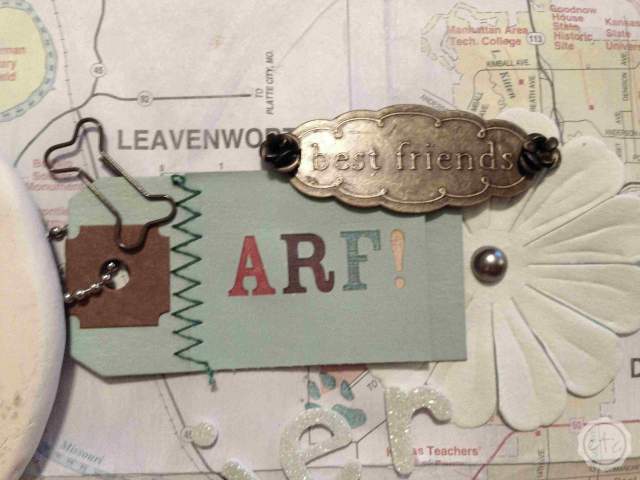 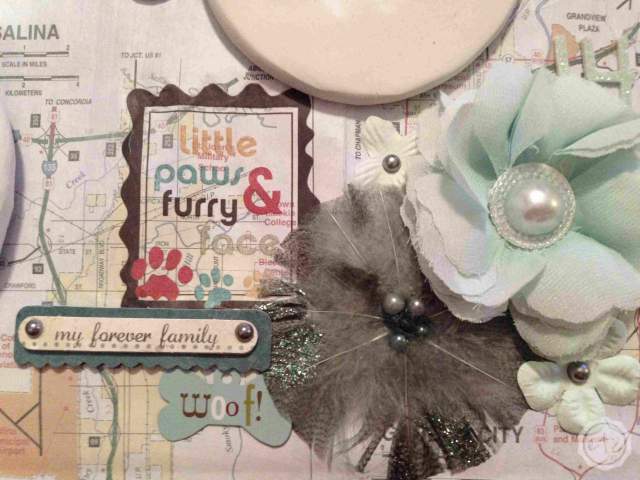 I absolutely love how it turned out. A real tribute to man’s best friend… my hubby was very silent when I gave it to him last night. I think he truly loved it, I know I do. My mom suggested today that I should have waited and given it to him for Christmas! I was so excited that it was finally finished and came together so beautifully that I never even thought to wait. Oh well I guess I’m a day late and a dollar short as they say.

So what about y’all? Do you have a nod to a lost friend in your home? Where do all these little paw-prints go after their companions have moved on? 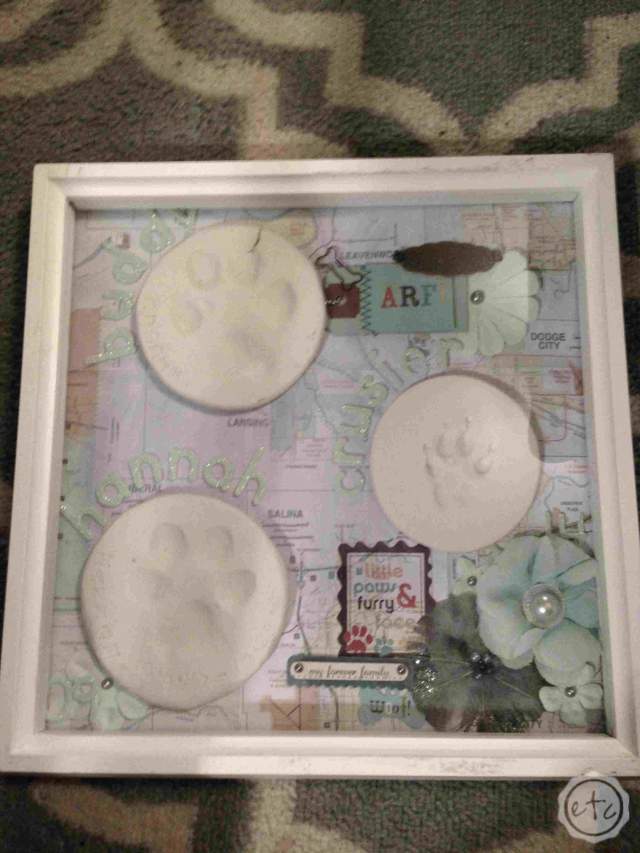 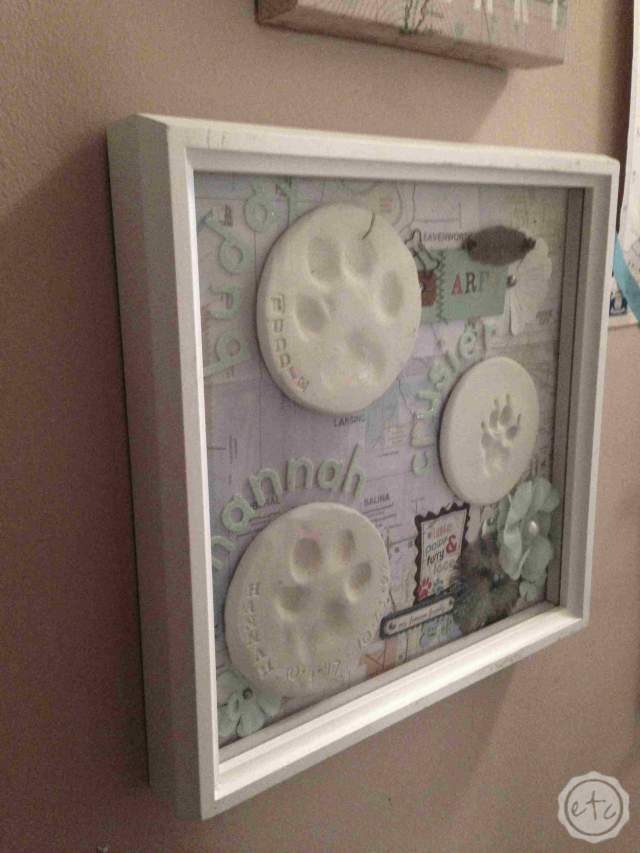 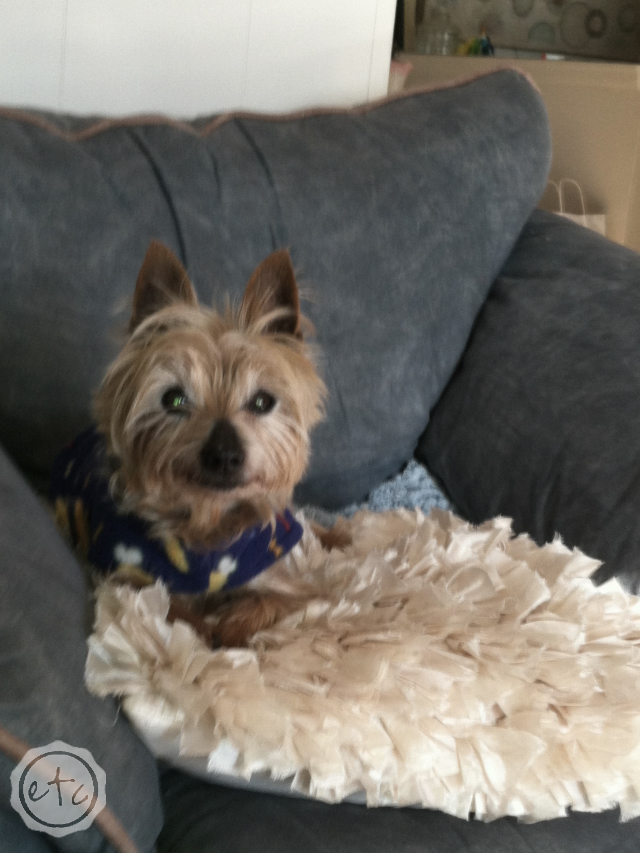 Gone but never forgotten, We love you little man. 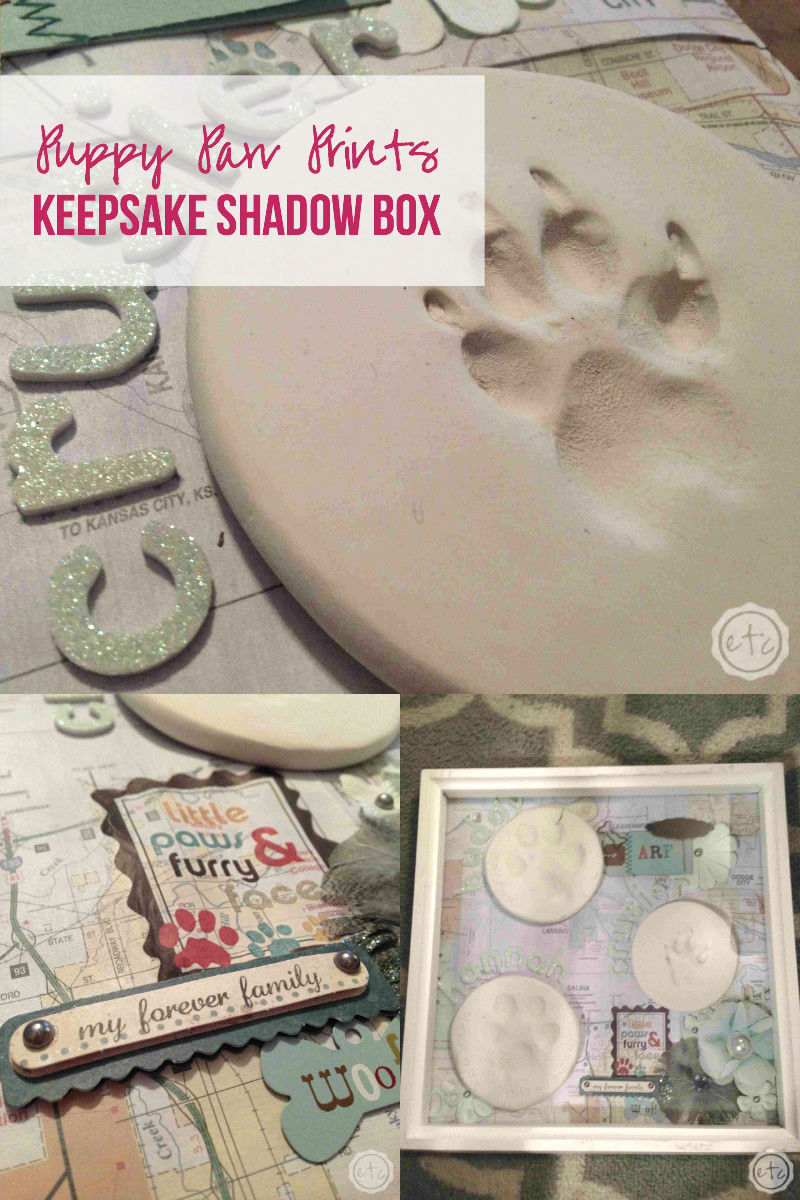 Linking up with: Anderson + Grant & My Own Home & A Glimpse Inside