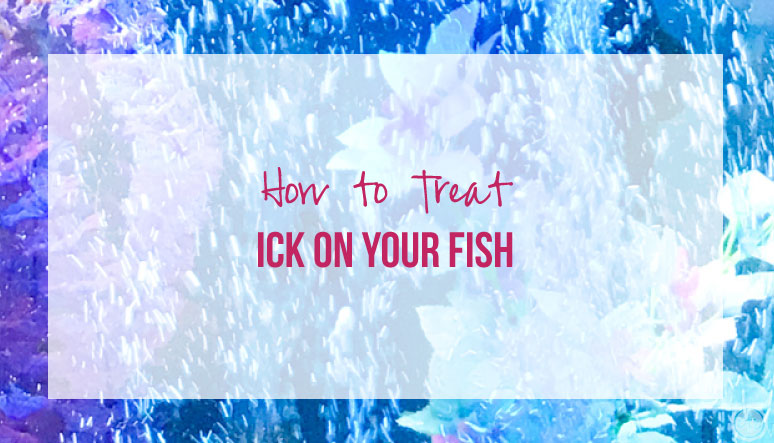 Okay y’all it’s happened… I ordered a few fish online and they came covered in Ick. All of my current fish are bought from a local fish store here in Alabama that takes wonderful care of their fish… so I’ve never had to deal with an outbreak of Ick before nor did I know how to treat Ick in fish before last week.

Unfortunitely of the 13 fish I ordered (5 blushing tetras, 5 diamond tetras and 3 farlowellas) 6 fish were DOA. Only one of the blushing tetras was alive when I unboxed the fishys and the poor thing was absolutely covered in Ick… and her fins were ragged and ripped. Four of the diamond tetras were alive but they had swim bladder like you wouldn’t believe and you could see little dots of Ick although they weren’t covered as bad as the little blushing gal. Two of the farewells were alive and active although they are so skinny I couldn’t quite tell if they had Ick or not.

If you haven’t heard of Ick before it’s a little parasite of a disease that attaches to your fish lives out it’s life… falls to the floor of the aquarium where it goes from one piece of Ick to a BUNCH OF PIECES of Ick before searching for a new fish to attach to and feed off of. Basically it’s a little multiplying parasite that wants to eat all of your fish.

Luckily it’s not life threatening to your fish unless it gets so severe it takes over the gills… effectively suffocating the little guys. So if you see any Ick on your fish at all act right away.

Do you see all those little white dots on the blushing tetra? That is alllllllll of the Ick. Of course, for every bit of Ick you can see there are probably dozens more… and while they attach to the fins first they will attach to the body and gills of the fish (even the poor little things mouth and eyes!) as they spread.

So we started treating for Ick right away. 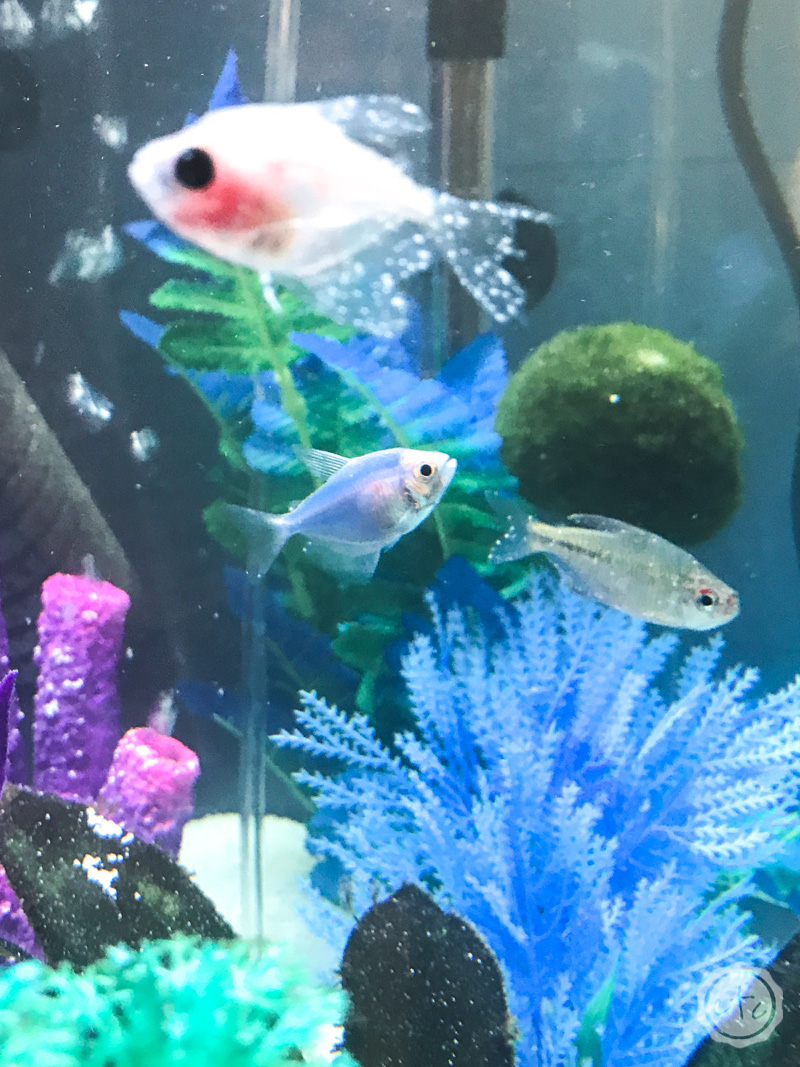 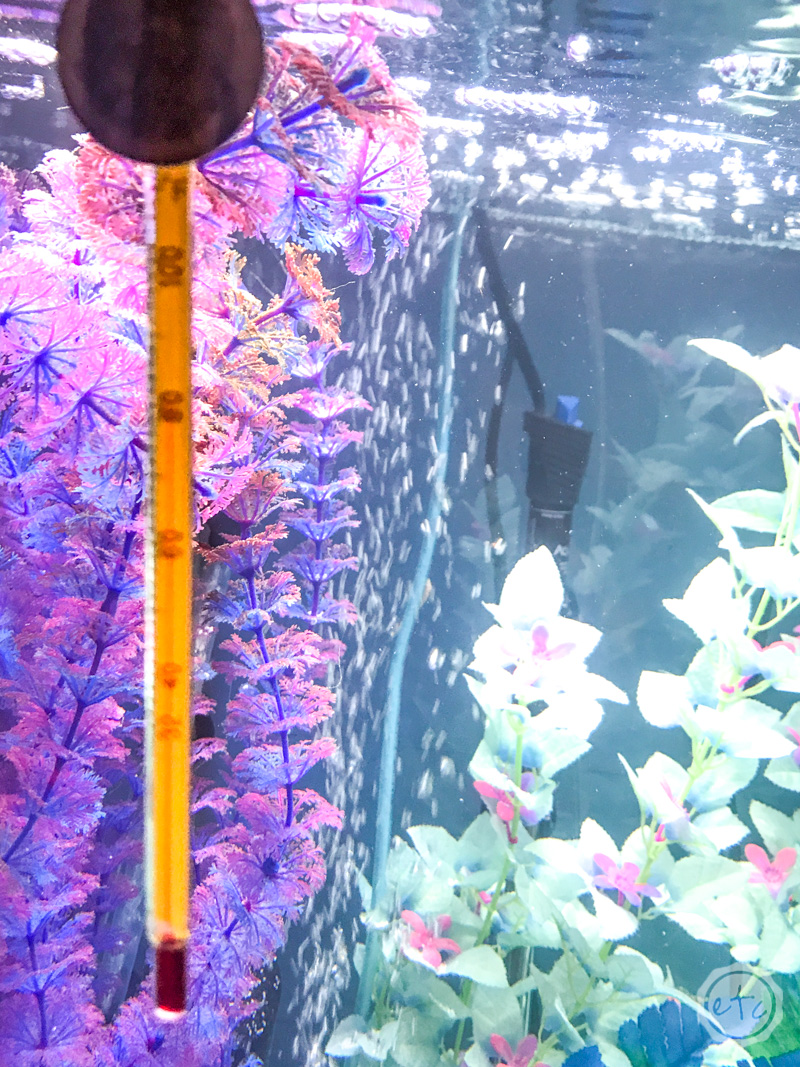 Step 1: Gradually turn up the Temperature

The very first step in killing Ick is to turn up the temperature in your aquarium. At 86 degrees Fahrenheit Ick has a life cycle of 4 days from when it attaches to your fish to when it finally falls off and lands on the floor of your fish tank.

You can only kill Ick when it is in the aquarium… it is immune to medicine while it is attached to your fish. So the easiest way to catch it at this stage is to turn up the heat in the tank so that the Ick is maturing and falling off the fish quickly.

Make sure to turn up your thermostat slowly, one or two degrees a day until it reaches 86.5 or higher. Of course, before you do this double check that your fish can withstand such warm water. Not all fish can and killing your fish from temperature while trying to save it from Ick would be horribly ironic.

Since I have yet to add my angelfish to the large aquarium and only have tetras and corydoras in this tank at the moment I was good to go with turning up the temp. It took about 4 days to reach 86 and I watched the little corydoras like a hawk since the tetras are less sensitive to temperature than the little panda catfish. 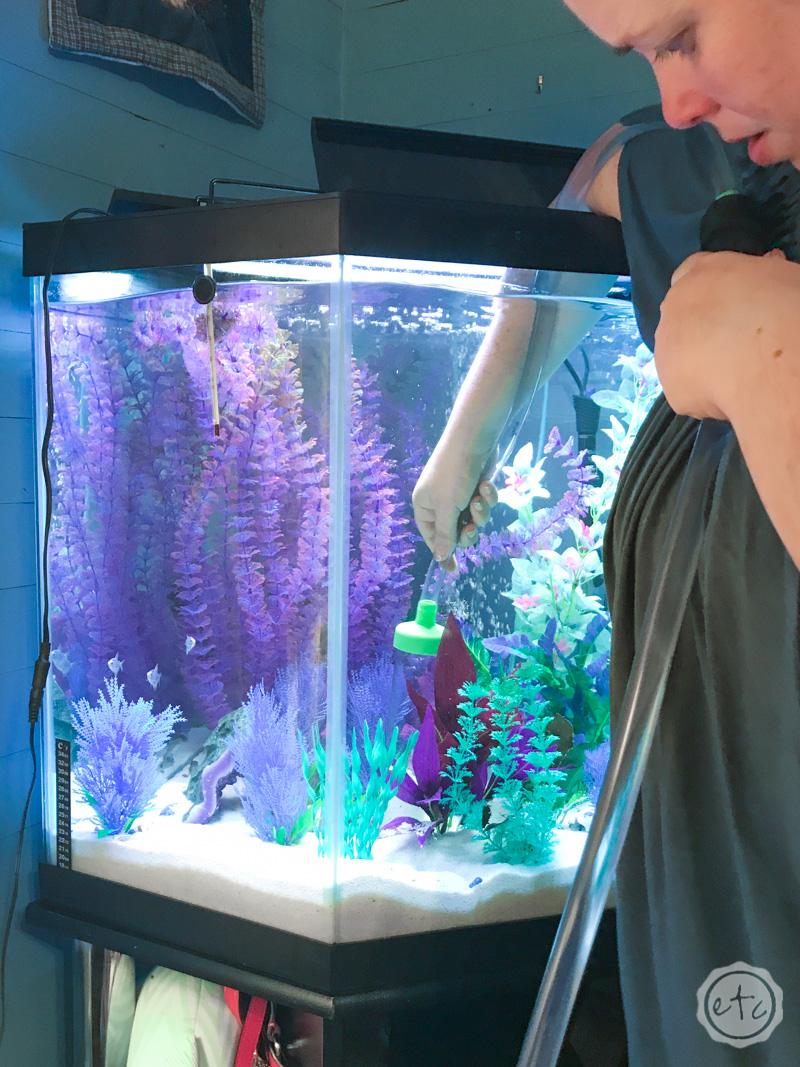 Step 2: Change the Water and Siphon the Sand

While you are turning up the temperature it’s time to start your daily water changes. Yes, I said daily. Because it’s easiest to kill the Ick when it is in the aquarium and not on the fish it’s important to take as much water out of the aquarium (and therefore as much Ick) as possible every day.

A 50% water change at the first sight of Ick is perfect… from there I did a 25% water change every day and I siphoned as much of the sand as possible while I was changing the water to remove as much Ick in the acquarium as I possibly could.

Luckily my Mom bought this python water changing system for my brother last year for Christmas and it makes it soooooo much easier to take water out of the tank and to put water back in the tank. Will and I use to spend hours upon hours changing out the water in his 55 gal and 30 gal tanks every month… it was literally an all day project.

This little python water changer hooks right up to the garden hose or sink and makes it sooooo much easier. Changing the water with this thing takes about 30 minutes for a 50% change. Now i just need to buy one for myself so that I can stop stealing Will’s every time I need to change the water in my tank. 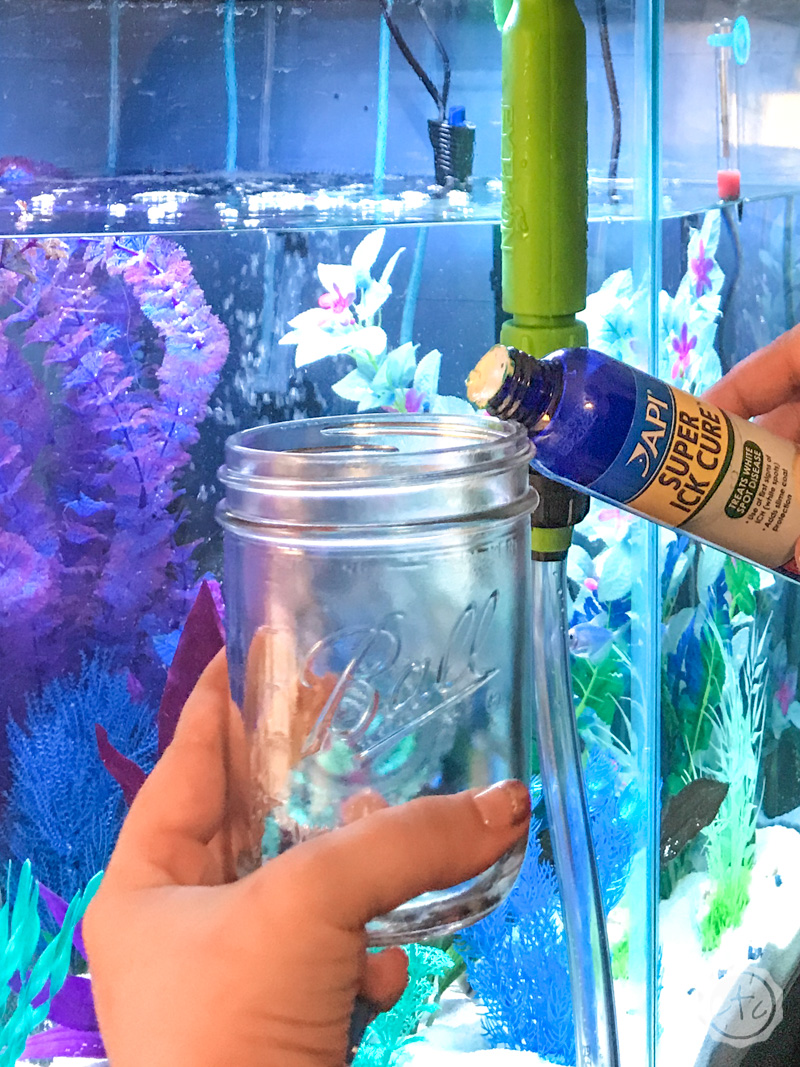 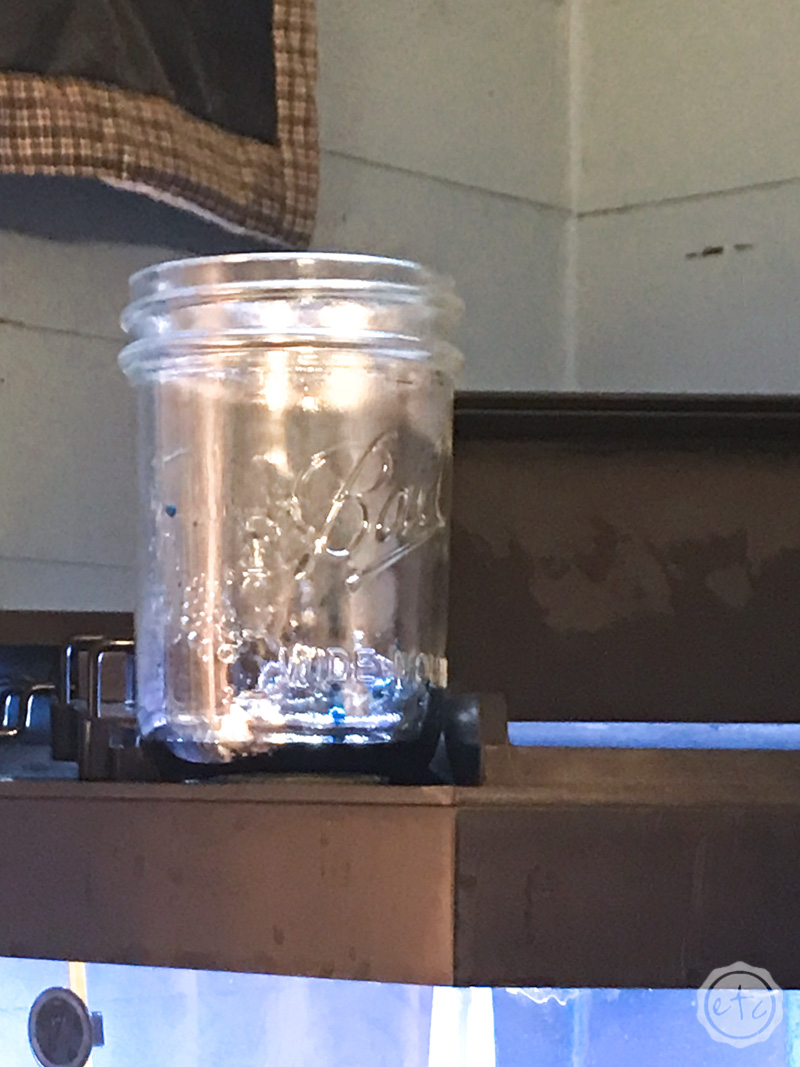 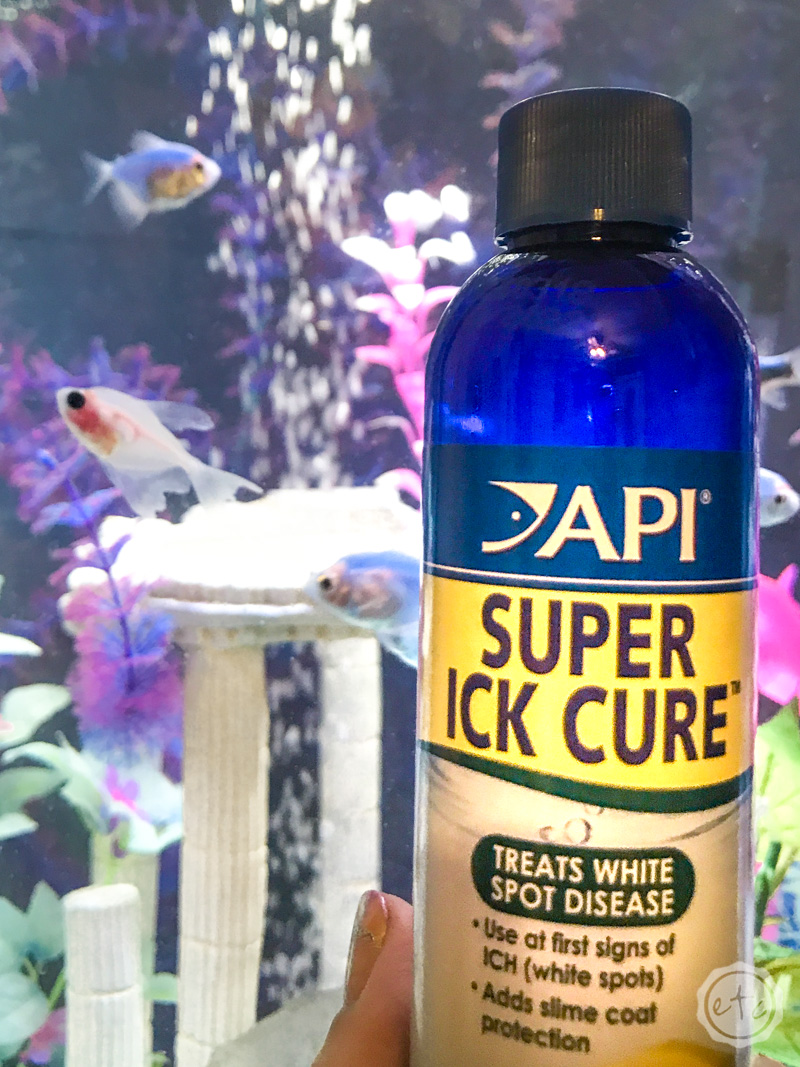 Now it’s time to add your Ick medicine. I picked this “super Ick cure” up at my local pet store and so far it seems to have worked perfectly. Just read the directions on the back of your container before putting in the medicine to make sure you use the right amount for your size aquarium.

From there you’re pretty much good to go. This particular medicine will stain everything it possibly can blue so make sure that anything you’re fond of in the tank is removed and you don’t use fancy measuring cups to measure out your dosage. Unfortunitely I learned that the hard way and now need new measuring cups.

I took all of my aquarium decorations out of the tank and only put in short blue plants that wouldn’t be hurt by the dye but provided somewhere for the fish to hide and swim. I didn’t put to many tall plants in because monitoring the fish and making sure the Ick is gone was half the battle.

Once you’ve measured out the right amount of medicine for your aquarium (remember to do the math… a 25% water change needs only enough medicine to dose 25% of the volume of your tank) go ahead and pour it in. I like to add it right before I turn the water on so that the motion of the water mixes in the medicine really well.

Stir the water at first to mix in as much of the concentrated water as possible and make sure not to pour the medication directly on the fish. It’s not good for them to come into a whole bunch of medication at once! 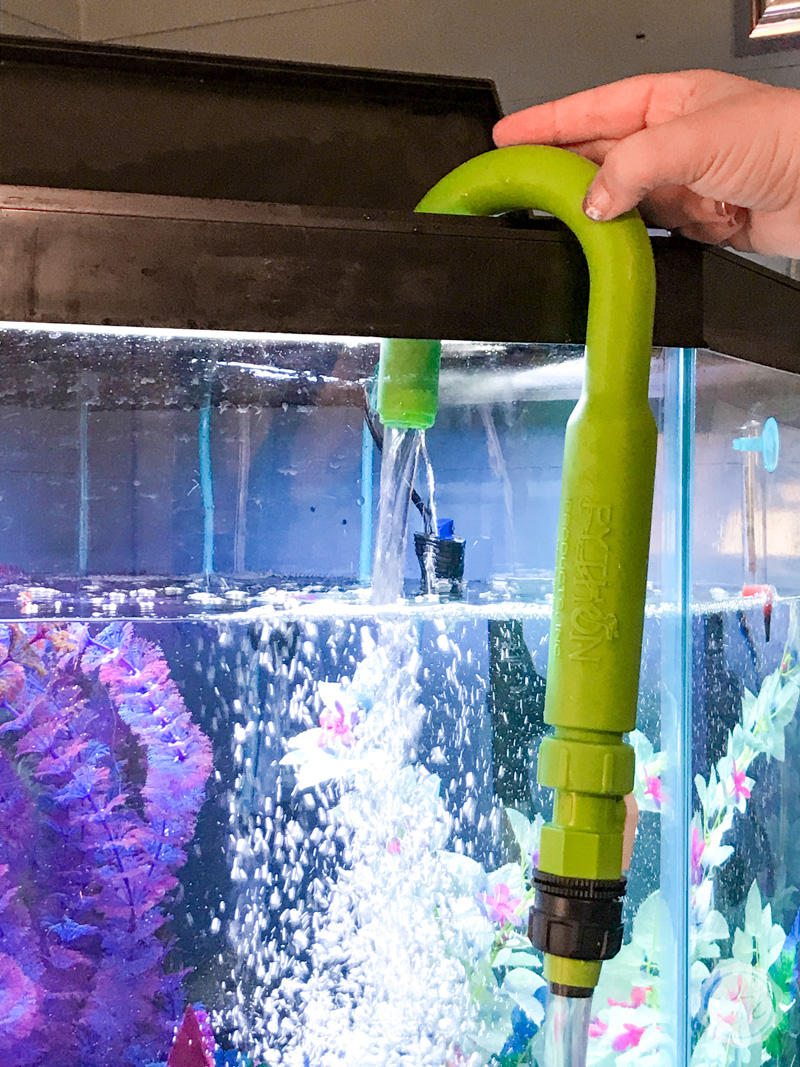 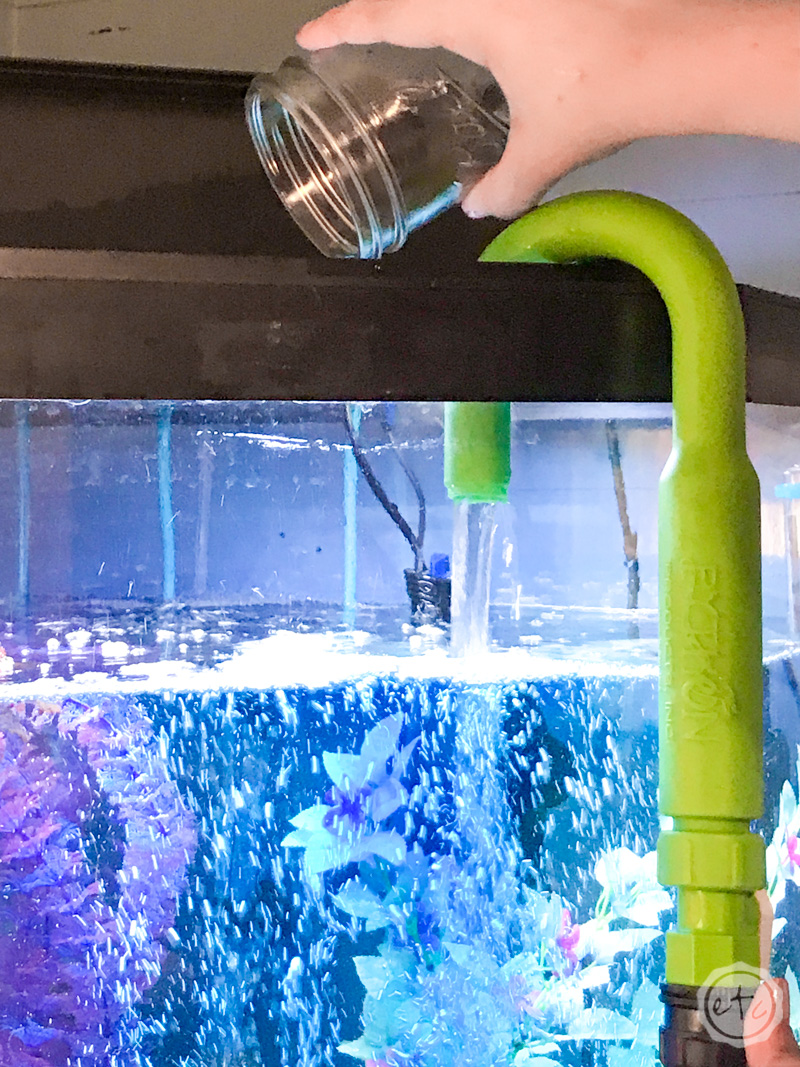 Step 4: Refill your Tank with Water 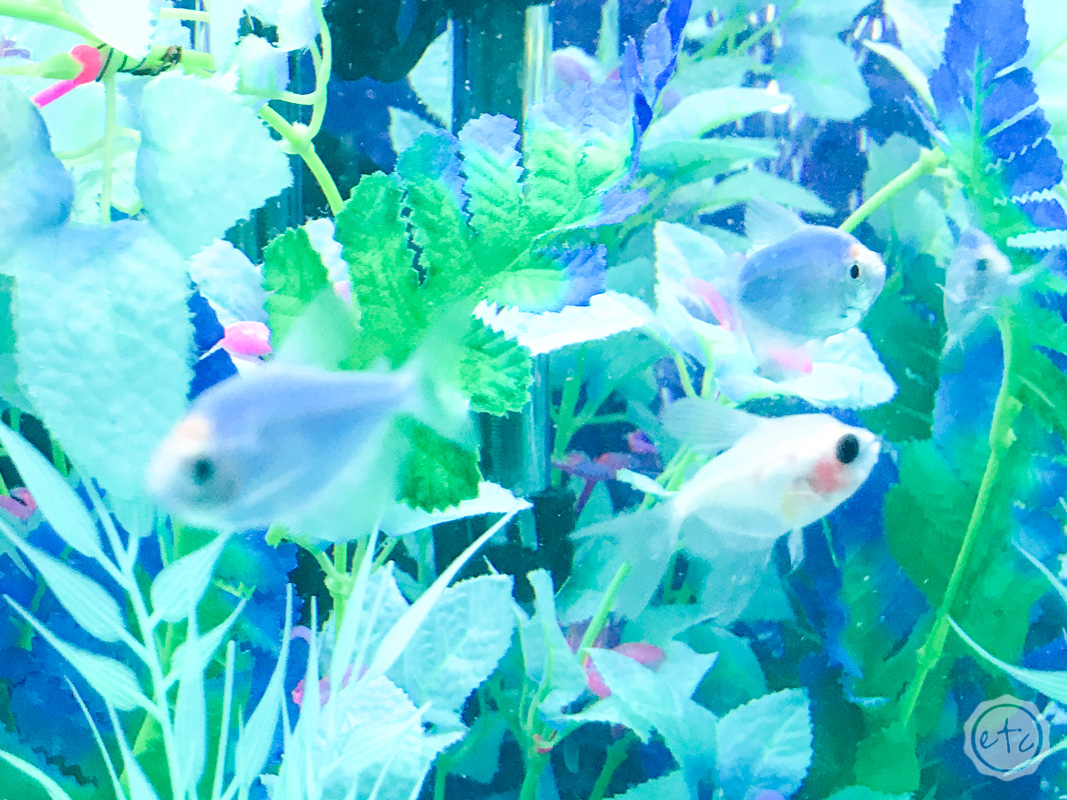 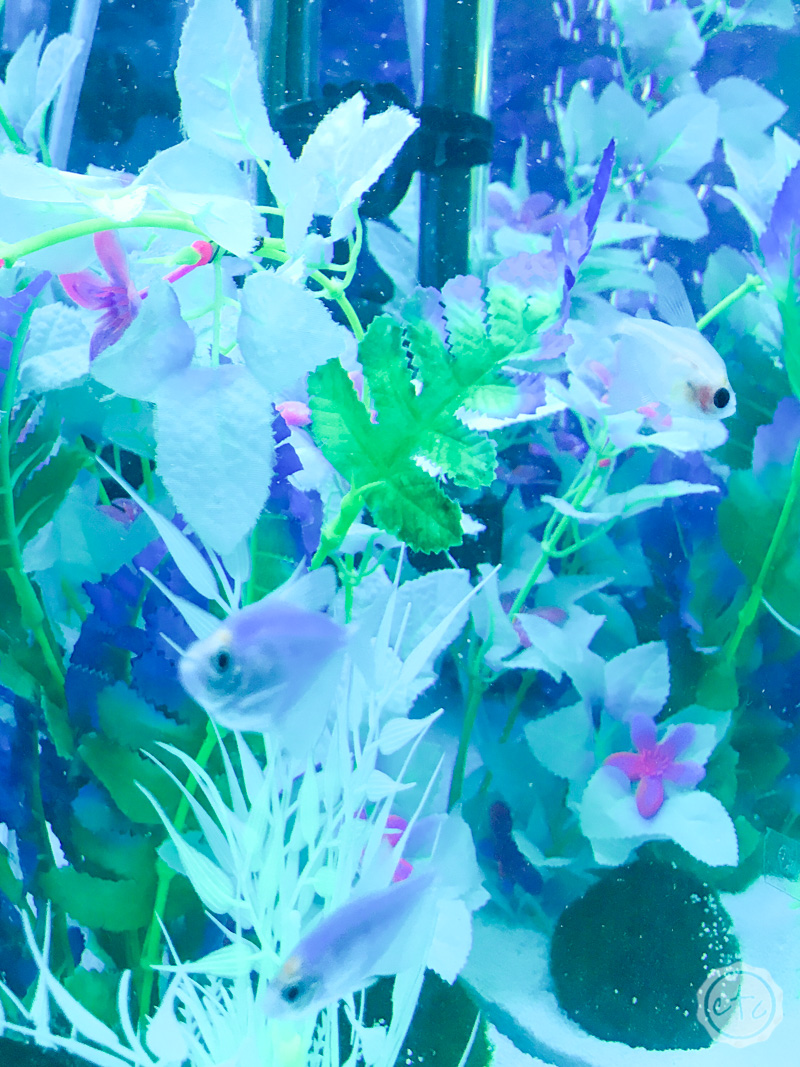 Repeat Steps 2-4 Every Day for 4 Days

Unfortunitely you’ll have to repeat this take-water-out-add-medicine-put-water-in process for a couple days. If your temperature is up to 86 and the Ick is falling off and dying in the medicated hot water then ideally after 4 days you won’t see any more Ick.

Of course, keep using the medicine until you see absolutely no sign of Ick on any of your fish! Do you see the little Ick spots on the blushing tetra below? This photo was taken two days into treatment and while there are still Ick spots she is looking much improved from the first day.

Those poor ripped fins though!

Once we get this little gal fixed up from the Ick we’ll work on re-growing her fins so that she’s healthy again. 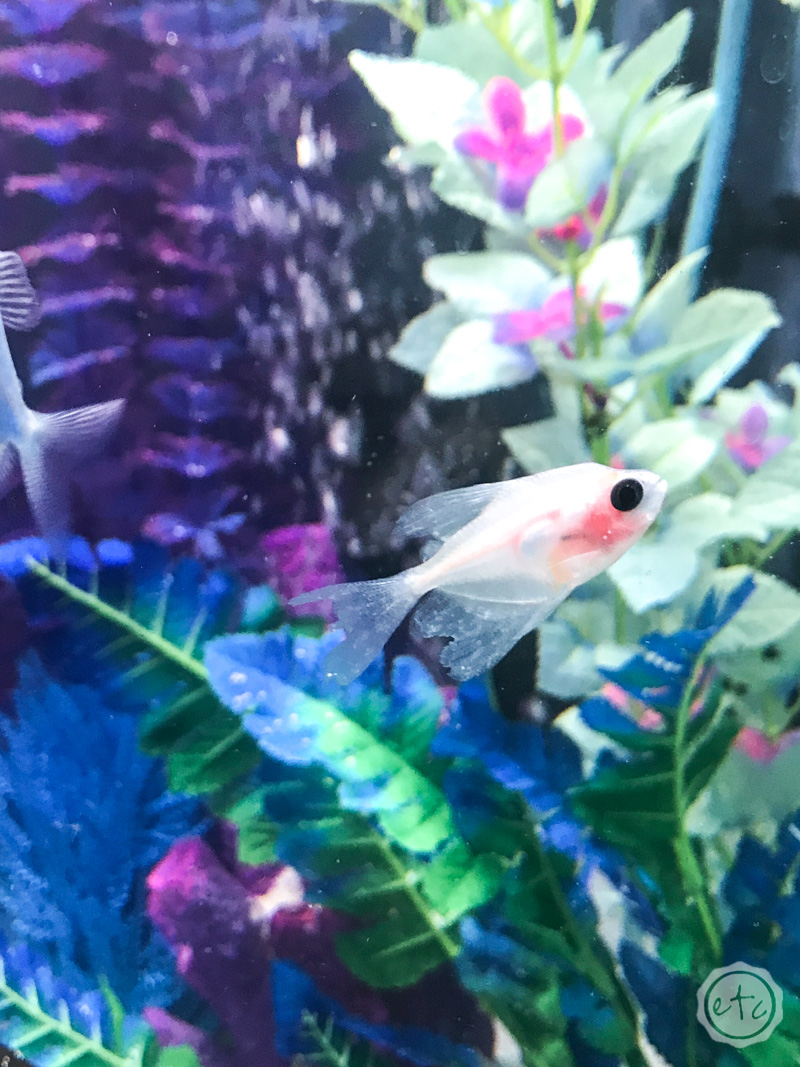 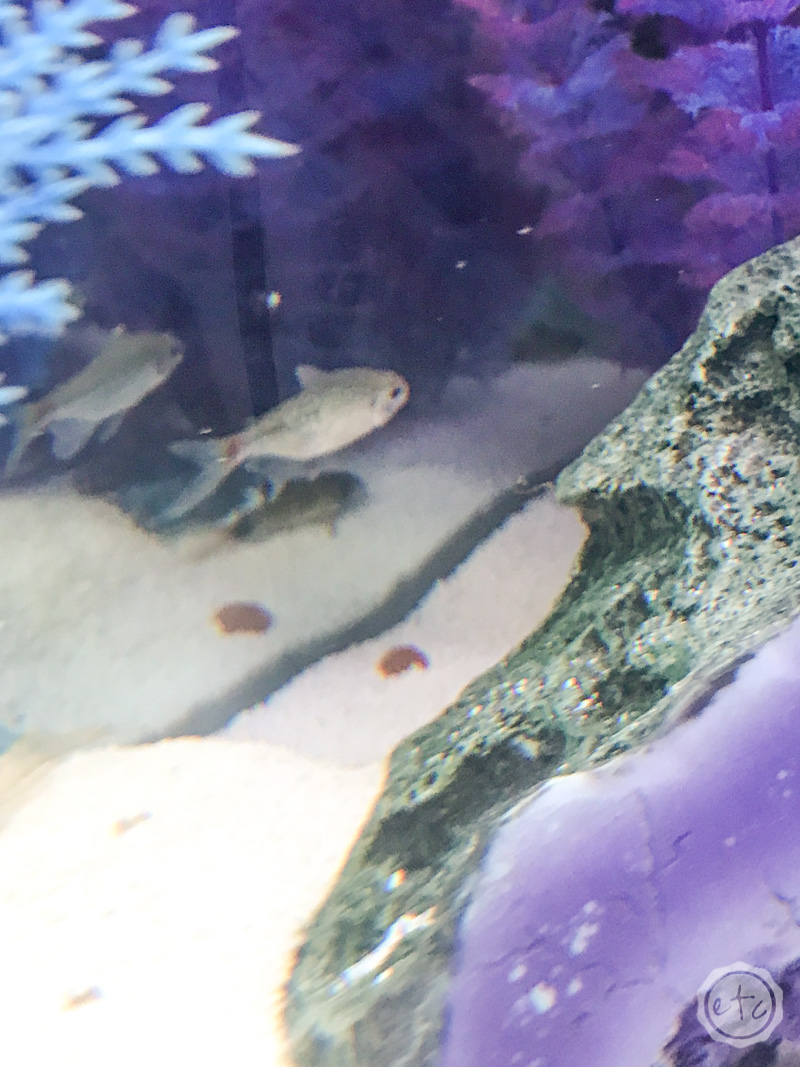 Step 5: Watch Your Fish for Several Days Before Turning down the Temperature

Once the Ick is completely gone leave the temperature elevated for a few more days… I would say 4 just to be sure that your aquarium is truly in the clear. Hopefully at this point you will be able to say that all of your fish are back to normal and the Ick is gone. 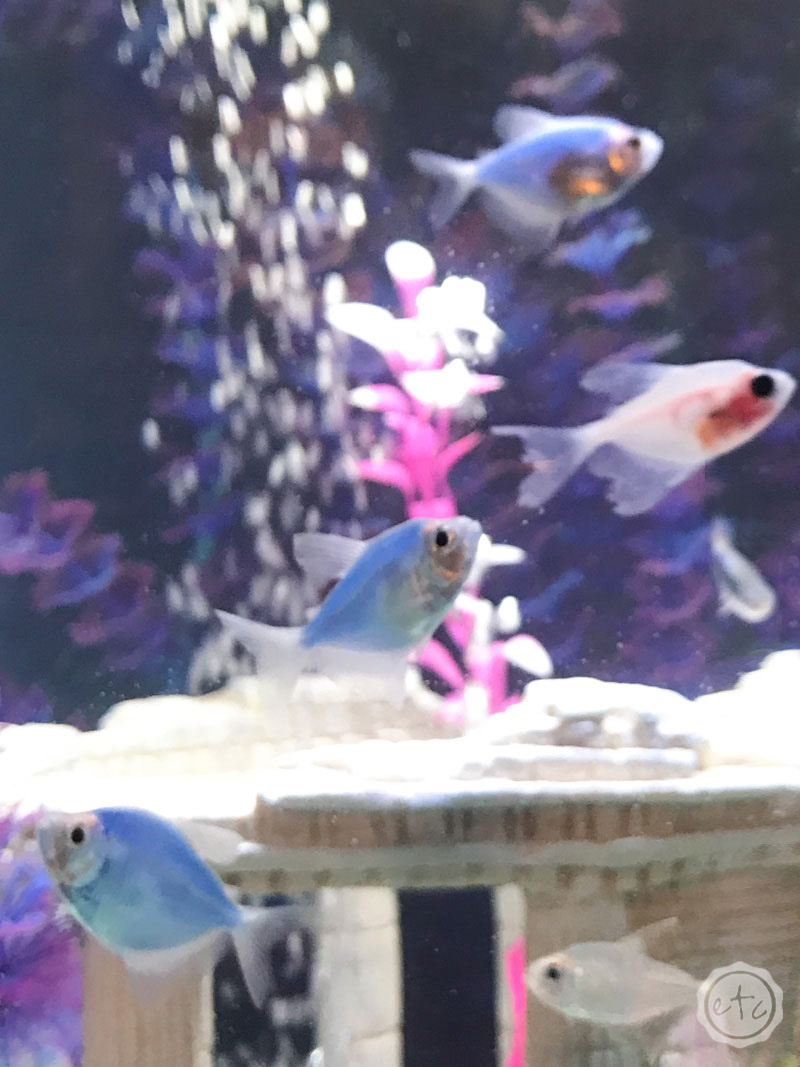 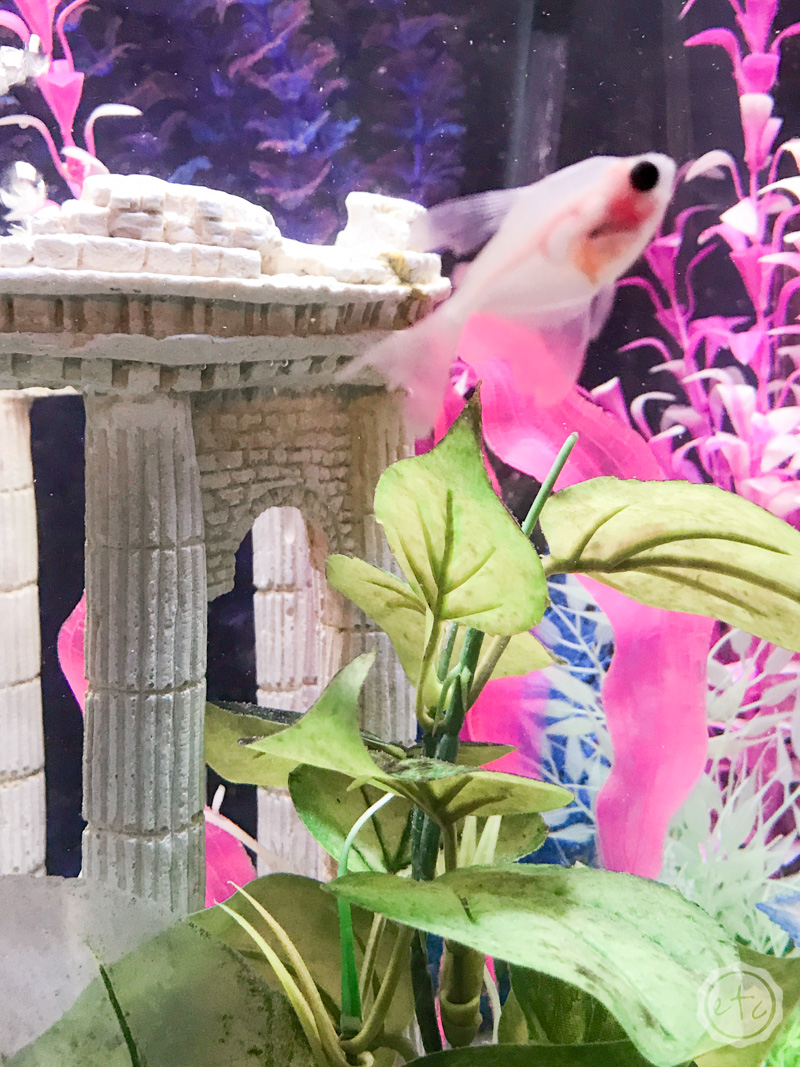 After quite a few days of treating this little fish for Ick she is completely cured. I am so glad she is feeling better. Unfortunitely she was the only survivor from this shipment of fish.

That’s right… out of 13 fish: 5 blushing tetras, 5 diamond tetras and 3 farlowellas only ONE BLUSHING TETRA SURVIVED. The two farlowellas were dead in the aquarium the morning after they arrived. The four diamond tetras had horrible swim bladder and spent the couple days they lived here swimming at an angle and looking miserable. Which leaves the one little blushing tetra that made it through!

Unfortunitely the blushing tetra did infect the other fish in my tank but they are all looking back to normal now. This was my first experience with Ick and my first experience ordering fish online. I have to say I will never order fish from this particular seller again. I did not do my research on him and now that I’ve taken the time to look am finding many reviews saying they had the same problems as I did.

Dead, sick or unhealthy fish. Not a good combo. The seller did offer replacement fish or a refund of my money but with only one surviving fish I didn’t want to take a chance on any of his other fish and went for the refund.

I am planning a new fish order of angelfish from a seller I have done hours of research on and I can’t wait to share these little babies with all of you! I also have learned quite a bit about ordering fish online and will be setting up a quarantine tank for the newbies to make sure they are healthy and free of any pathogens before adding them to my existing tank.

If you’re battling Ick good luck my friends! There is light at the end of the tunnel… just keep changing that water!