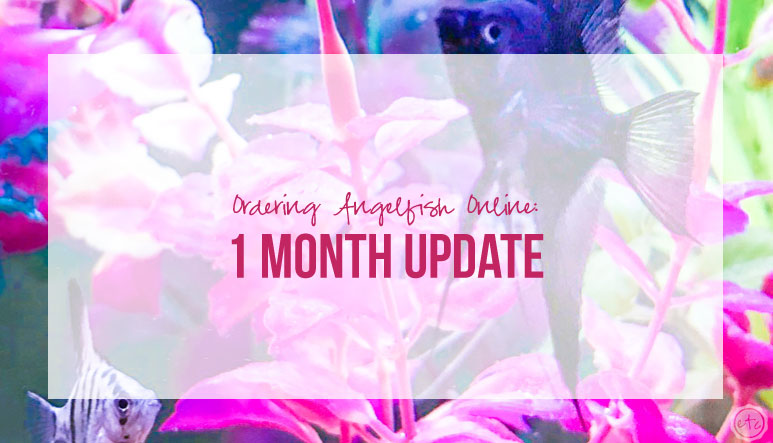 It’s been a month since these little angelfish babies came in the mail! This was my first time ordering angelfish online and it was actually a wonderful experience. These little angelfish came from angelmania and were pretty darn tiny when they arrived… most of them were about the size of a dime!

After a month of water changes, feeding and getting use to these little guys they’ve about doubled in size and are now in between nickle and quarter size (except for the little smokey one which is still huge compared to the rest!). Of course, if I really wanted to grow them as quickly as possible daily water changes and blood worms twice a day would do the trick but I want these guys to grow at a normal rate.

If you watched the unboxing video you know that I had 9 fish at the beginning of the month but unfortunately after a week I found one of the little fish *ahem* no longer with us. So now we have 8. After the big shipping fiasco one of the little fish wasn’t looking too great and he’s the one who passed. The 8 surviving fishies are doing great! 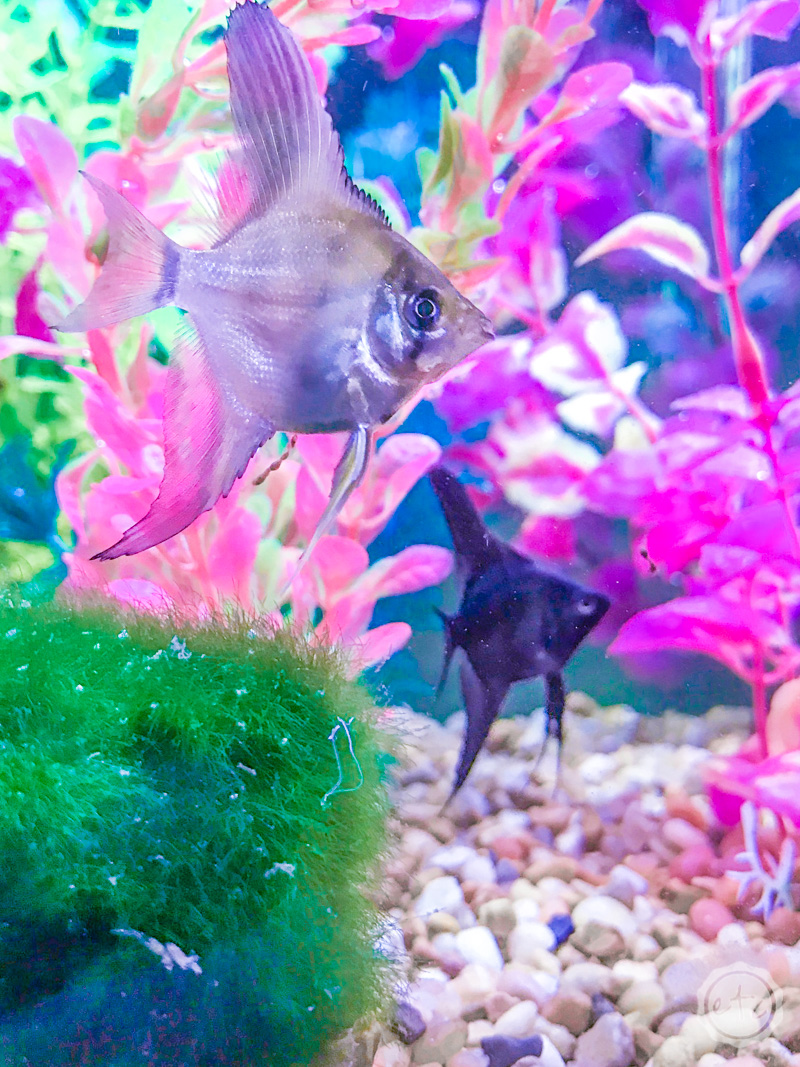 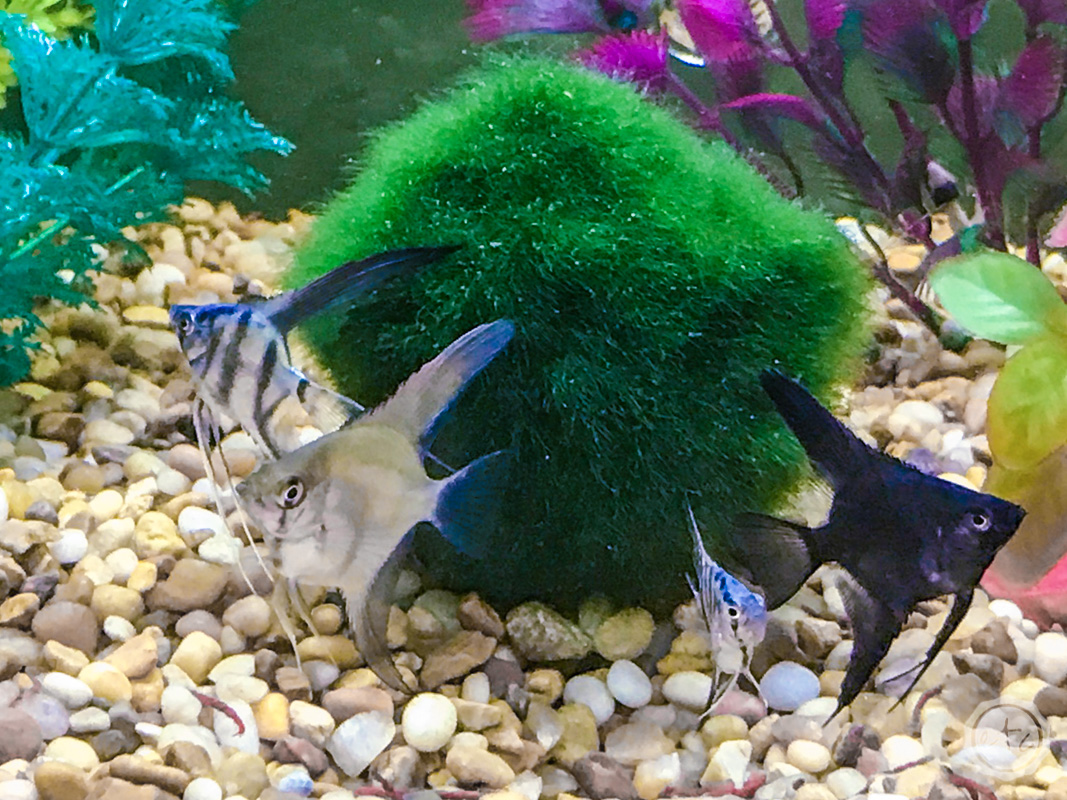 It took about 3 days for these little guys to get over the stress of shipping and start to show their color a bit. Other than the little black fish the remaining fish all looked very pale and similar in the first week. There stripes started to come back first and as these little babies started to get bigger there color really started to come out. Now they are looking pearlscale platinum, smokey blues and even beautiful shimmering greens!

I can’t wait until these little babies are fully grown and there true color has emerged!

They are still babies and absolutely love swimming together. I went in to feed them earlier and found these four sitting in a little semi-circle around their moss ball.

Since Lee over at Angelmania sent these little guys based on what I told him I wanted it’s hard to give them a specific name… as they get older we’ll be able to better tell their full coloration. In the meantime I’ll be using very accurate names like Little Black Fishy! 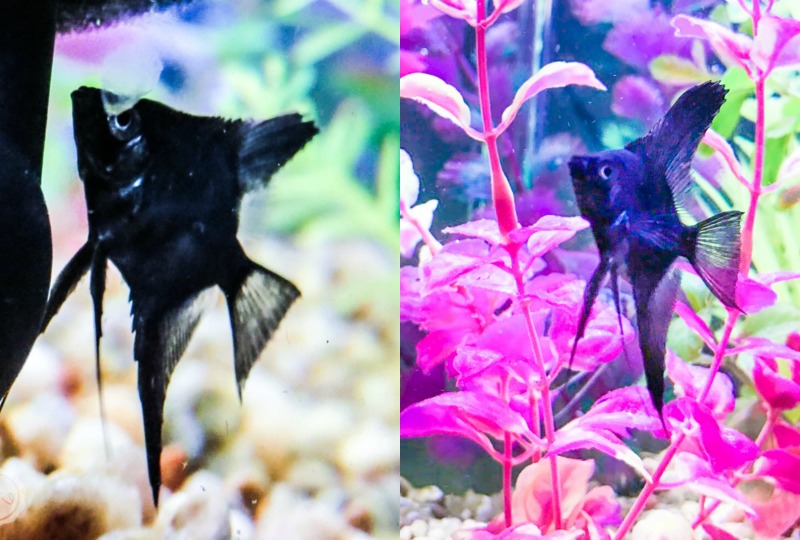 This little guy (and to clarify I can’t tell if they are boys or girls yet so I’m just using the terms loosely) is the second biggest of the bunch. As a black angelfish he’s the only one that is 100% easy to identify as the blue pinoy veil widefin angelfish!

He is the second biggest of the bunch but probably the third shyest so he only comes out when he’s hungry or if the rest of the fish are out. He is typically hanging out with the more vibrant of the marble phillipine blues (the one pictured directly under this!). Although they’re really too young to pair off these two are always together and I’m hoping *crosses fingers* that they will be mates when they grow up!

Of course, there’s no guarantees… for all we know they could both be boys (or girls!). 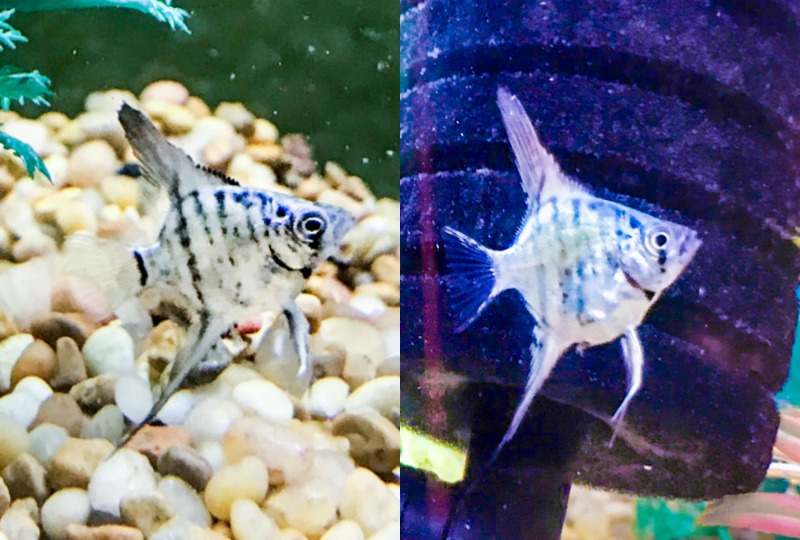 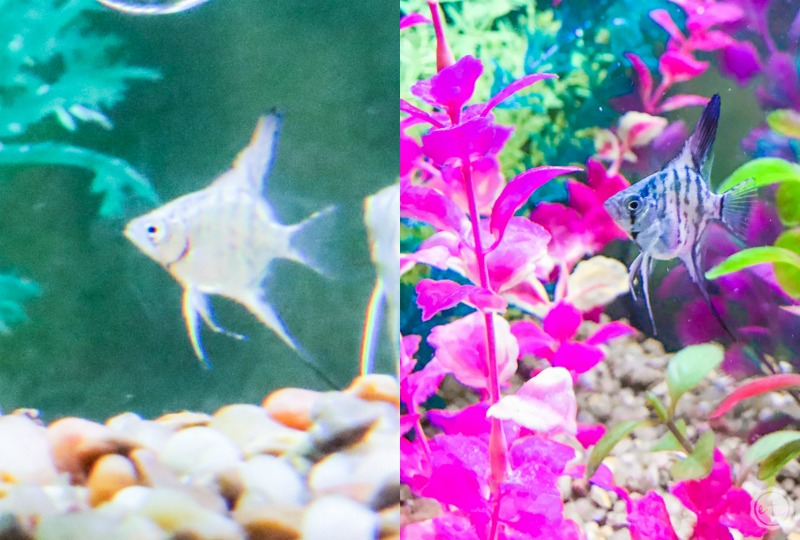 These two little marble babies are the smallest of the lot at only a dime and a half size. There are two of them and they are little twins! Of course, they’re not identical (other than in size!) as one is shier than the other. He is also a bit of a paler blue color while the second fish is besties with the little black fish and has a much brighter blue and green pattern.

It’s a bit difficult to photograph these guys with their vibrant colors… especially since they are still a bit scared of the camera.

It took about 3 days after arriving for these guys to start eating their baby brine shrimp and after slowly introducing blood worms, regular sized brine shrimp, flakes etc these little guys will come running for just about any food! Angelfish are notorious for being enthusiastic eaters so it’s been fun to see the transition from not knowing what food was to these little babies coming to the front of the tank in hopes of a meal every time they see me.

Of course, they are still shy of the camera and tend to dart away when they see it. It is big and fast so I don’t blame them (although I try to be as calm and slow as possible) they will get use to it over time though and soon won’t run away from the camera just like they now run towards food. 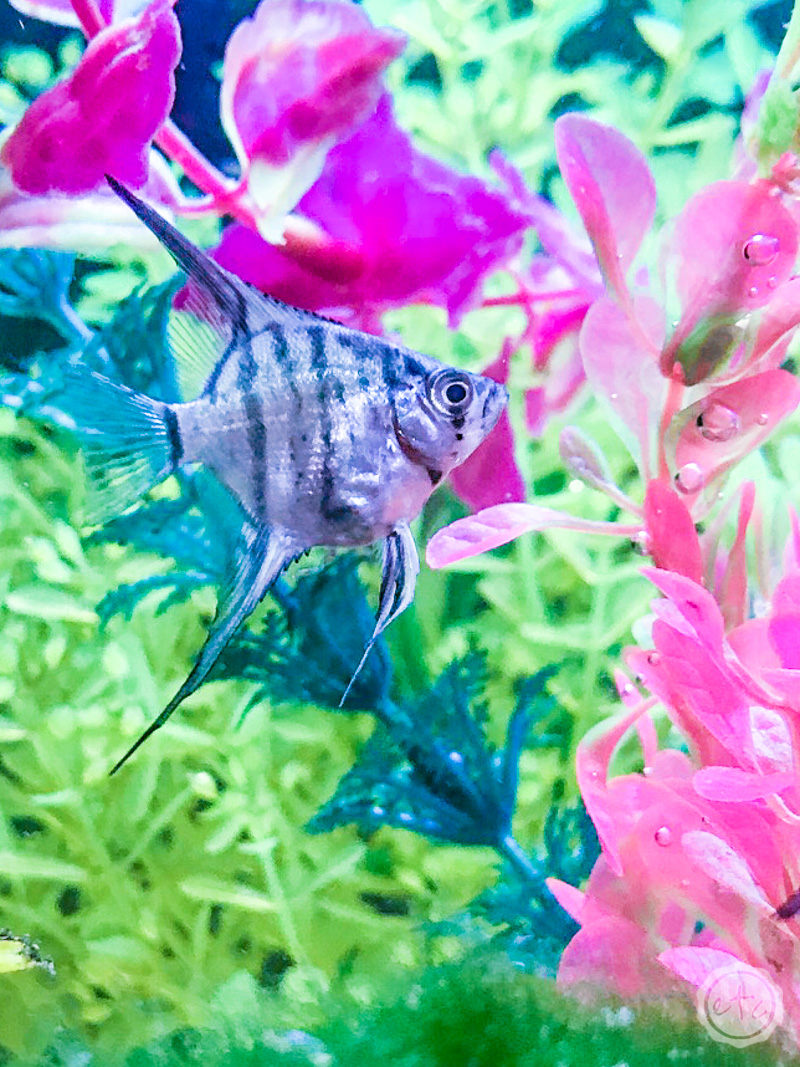 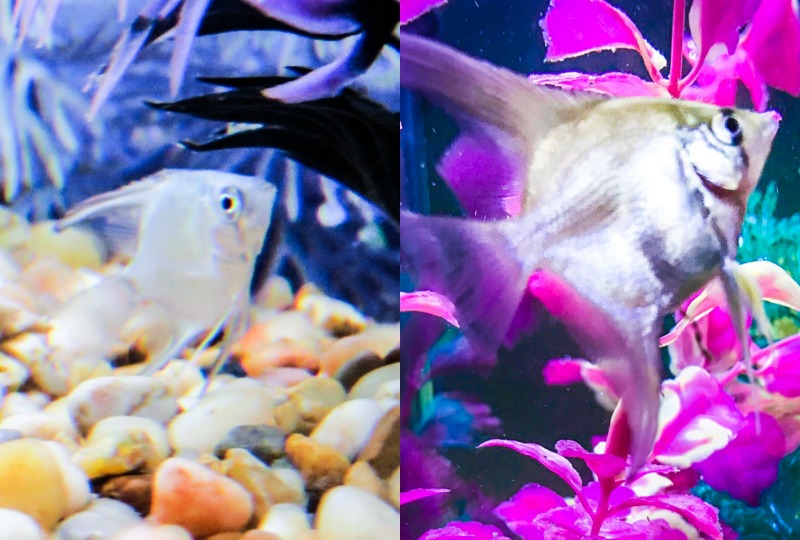 This little guy is definitely the biggest in the tank. He started out the biggest and has only grown bigger! He’s about as brave as the little black one and is one of the first to come out and ask for food.

He is about a quarter in size now and could probably be moved from the quarantine tank and into the big tank but I want to move all 8 at the same time. When ordering fish online it’s so important to quarantine your new fish… it helps make sure even small infections, parasites, water changes etc won’t harm your new fish or your existing fish.

If these little guys were full grown a four week quarantine period would be perfect but since they are still babies I want them to all be about a quarter size before moving to their new home. That will help them when adjusting to the bigger tank and the new fish (15 tetras, 10 panda cory cat’s and 1 platy!). 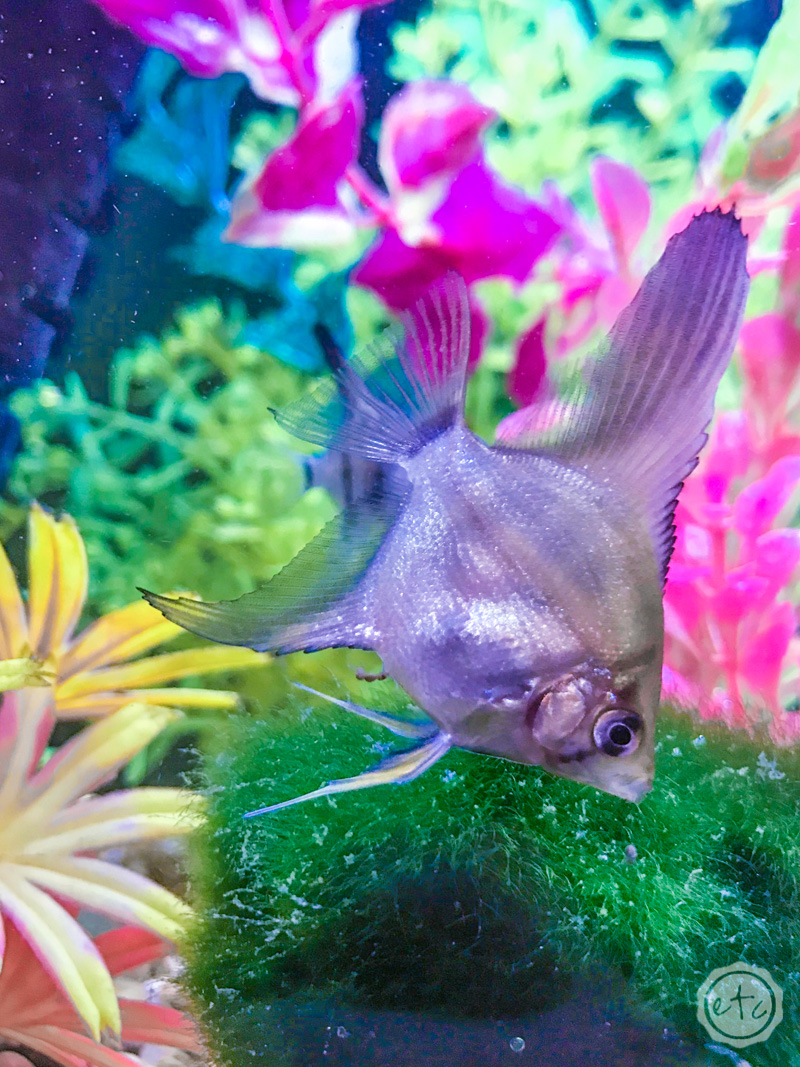 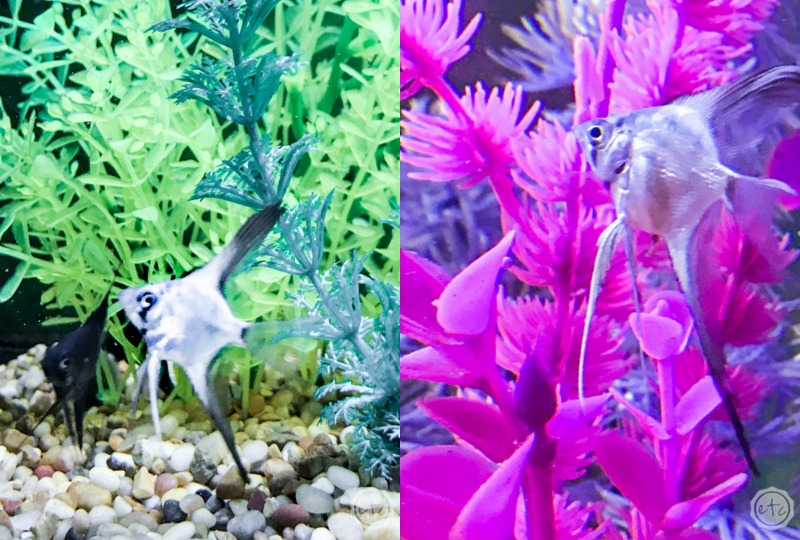 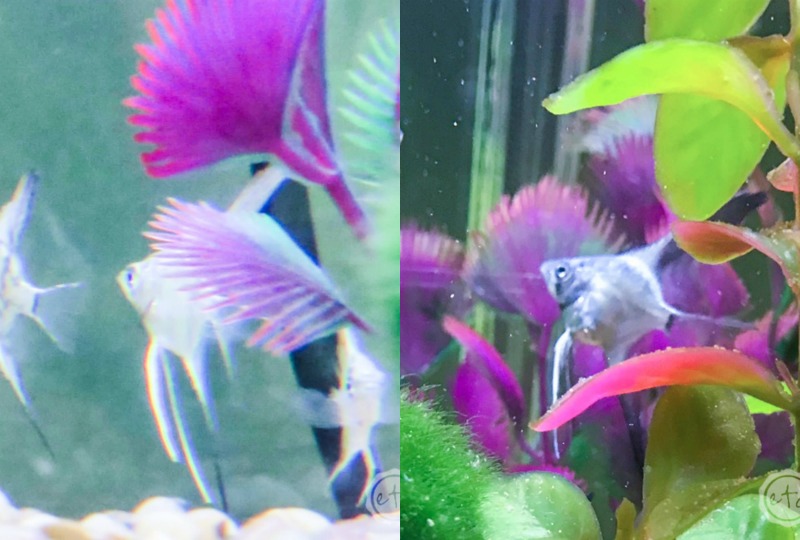 These two little guys are about as close in size as the two little marble angels! They are a beautiful smokey blue color and look like they will have pearlscales when they’re older!

These two are both fairly shy and love to swim around the long plants. They also love to eat and are about 3rd or 4th in line to come grab a bite when offering fresh food to the tank. They’re brave enough to even start nipping at your fingers in hopes of food! 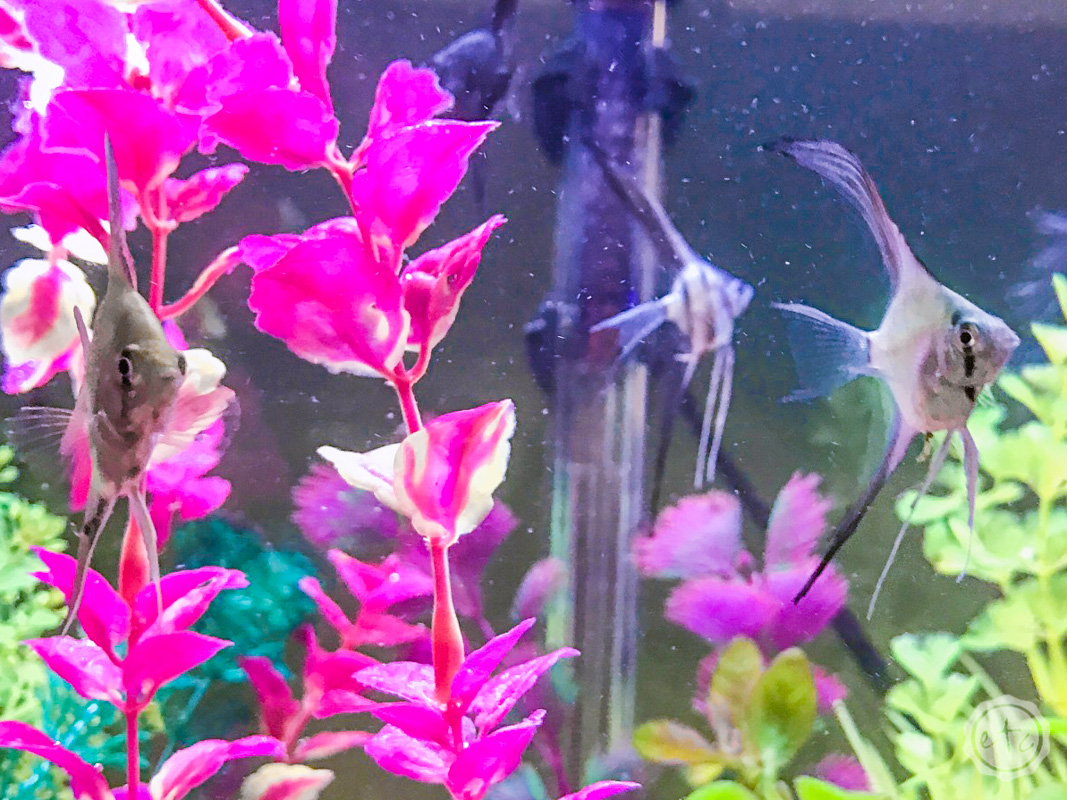 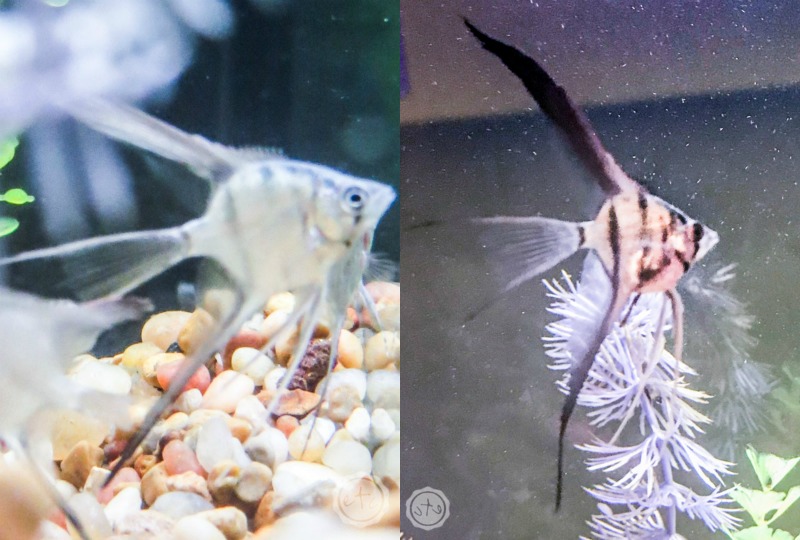 Do you see those long fins?!?! This little angel has fins that are 3 or 4 times as long as any other fish and is going to be absolutely gorgeous as an adult.

She is probably the shiest out of all the fish and is usually very hard to find. Even with the long fins this little gal knows how to stay hidden! I’m often looking for her and think I find her only to find that I’m looking at one of the platinum blues and shes still hidden.

Since these little babies are still young their color really only comes out under optimum conditions so the long veil and platinum often look the same except for the length of their fins! 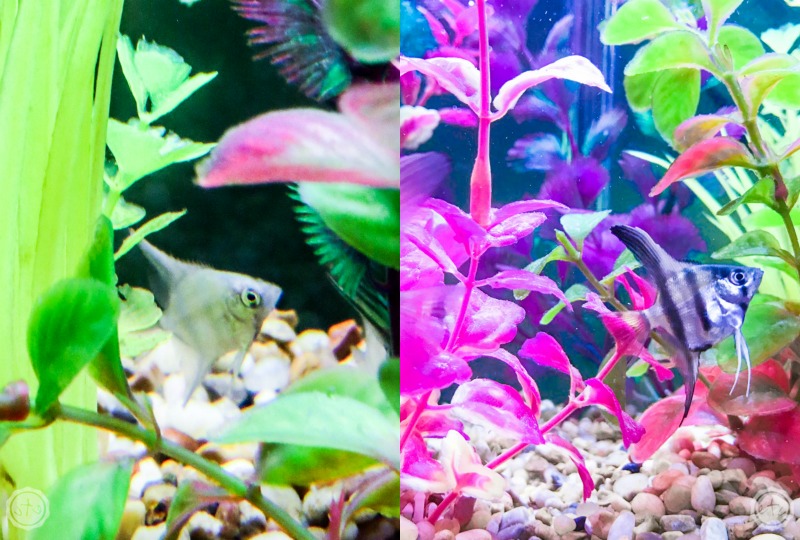 This little guy is proof that big things come in little packages! He’s the second smallest after the marbles but he’s definitely the most outgoing and bravest! He’s the first one looking for food at feeding time and comes right up to you when you walk near the tank.

He’s been like this since the day he came home so I guess sometimes personality is just strong in a particular fish. Since he didn’t have stripes at the beginning (like all of the other fish!) we just called him the friendly fish… you know… since he’s so friendly. 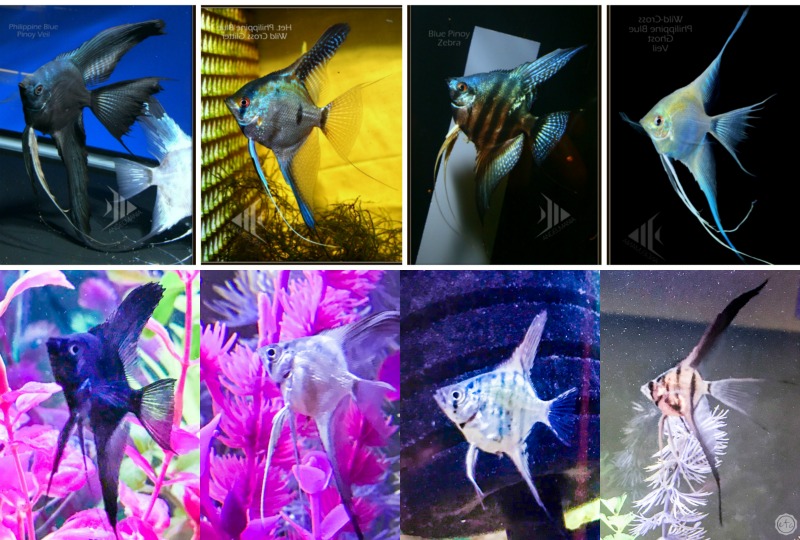 Now that we can see a bit of these fishes true color I took a shot at pairing them up with the photos of the parent fish from the Angelmania website. Since angelmania sells baby fish you don’t know what their true colors or patterns will be once they are fully grown… you just know what the example or parent fish look like (and hope that the fry will look very close!)

Since Lee (the owner and fish breeder over at Angelmania) took my order of 4 fish and sent me 13 to review I have several variations I didn’t technically order so trying to identify these little guys at such a small age becomes even more challenging! We’ll see what the color variations look like as these little guys grow and go from there!

As you can see all of the fish are doing well! After a month they have doubled in size and are eating like champs. They are still a little skittish and need to grow a smidge more before moving out of the quarantine tank.

Hopefully at the two month update we’ll be moving these babies into their forever home! Then we can do an update on “how to move your fish from their quarantine tank!”

If you have any questions on angelfish or ordering fish online leave them below and I’ll do my best to update you here!